Unclear (near youko and inari)

A monster covered in wavering flames possessing the characteristics of a fox. They’re born when vast amounts of condensed demonic energy and excessive lust from either “youko” or “inari” takes shape and changes into a monster, so they’re close to elementals. Lots of them live near youko and inari with many tails. As for inari, in the same way that they use demonic energy, they don’t produce kitsune-bi without thinking it through, but just as youko are always scattering around demonic energy, in the same way, they produce large amounts of kitsune-bi and release them nearby.

That which comprises them exists at the foundation of fox monsters. They are clumps of pure, powerful desire.  For that reason, soon after they are born, the only thing they’re conscious of is a powerful urge to have sex with men and indulge in pleasure and spirit energy. They don’t have a distinct consciousness or sense of self as individuals. For that reason, the only things compelling their behavior are the desires “I wanna get off.” “I want spirit energy.” It follows that they’ll probably try to sexually assault men.

However, after their first time having sex with a human man, changes become apparent. After actually touching and tasting a man’s body, they start to feel affectionate towards that particular man. Their desires which were vague before then become more concrete, such as “I want to get off with this man.” “I want this man’s spirit energy.”

The lust for sex which is the foundation of their being also changes into something more concrete and at the same time, they will grow bigger, stronger and even more lascivious. They were vague clumps of demonic energy, but by having sex with a man, they gain a fixed existence as individual monster females.

Also, kitsune-bi who don’t have men are vague existences, so it’s easy for them to become tied with the desire of human women, so they try to possess and fuse with them. Women possessed by them are called “kitsune-tsuki.” It is said that they transform into monsters whose body and heart are both ruled by the fox’s desire.

Additionally, there’s no difference between kitsune-bi produced by youko or inari. Their disposition and lustfulness is exactly the same. Though both races have different natures and dispositions, from this point, the enormity of their lust is the same in either case, so we can say the true essence of both races is the same thing.

Can spirits, like Kitsune-bi, take away the identity of the girls in whom they moved? Have there ever been cases when the memory and consciousness of the original person are preserved, but the personality of the spirit disappears?

It does not work that way. 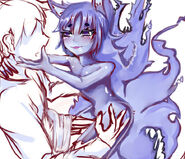 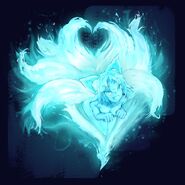 Retrieved from "https://monstergirlencyclopedia.fandom.com/wiki/Kitsune-bi?oldid=1177324"
Community content is available under CC-BY-SA unless otherwise noted.