Human women who were possessed by “kitsune-bi” and became monsters. Their consciousness and memories from when they were human are preserved and they still look the same as humans, but the fox’s desire dwells within them, ruling their hearts and bodies, so they change into alluring women with a fascinating sex appeal who are lustful like the fox monsters.

Women possessed by kitsune-bi, experience small changes at first such as an interest in sex, a preference for meat and fried tofu, they also become more aggressive towards men.  Afterwards, gradually, whenever they look at a man, they feel a need for something and their body throbs. They start having dirty thoughts and before long, their lust swells up and they start to strongly yearn for a man. At the same time, their appearance and personalities change, enabling them to charm and tempt men. They end up having a voluptuous atmosphere, just like a youko or inari. They gain joy and self-confidence as they change into attractive women in this way, so no matter how timid and shy the woman was originally, she’ll be able to arouse and ignite men’s desire with her words and mannerisms, to easily imprison and have sex with the man she’s after.

Normally the kitsune-tsuki live lustfully according to desire, polishing their charm and lasciviousness, they end up as youko-like kitsune-tsuki. There are especially lots of these kinds of kitsune-tsuki around high rank youko. They’re part of the debauchery produced by youko. On the other hand, the shrine maidens of the “inari cult” that worships inari as gods sometimes have themselves changed into kitsune-tsuki directly by an inari as a way of getting closer to the inari. In this case, they are trained and educated thoroughly by the inari so that their body and heart grow accustomed to the inari’s desire and demonic energy.

They end up becoming inari-like kitsune-tsuki that have two faces, whore and dignified lady. The source of the kitsune-bi has nothing to do with this change in disposition. For example, suppose for some reason an inari’s demonic energy went out of control and formed a kitsune-bi and a kitsune-tsuki was born from it in a place unknown to the inari. In that case, the kitsune-tsuki would live according to the fox’s desire, growing to be almost completely like a youko.

You can see fox-like ears and tail in this illustration of a kitsune-tsuki, but normally humans are unable to see them. The only ones who can see them are they themselves and the men who are the objects of their love and desire that have had sex with them. The changes that occur after becoming a kitsune-tsuki just makes the woman look a bit peculiar to other people. Sadly, the only ones who will ever know their true nature are their prisoners, the men who have been defanged. For that reason, even if they dwell in human settlements found in regions that are hostile to monsters, many of them spend their days indulging in pleasure and the love they share with their husbands with those around being none the wiser. 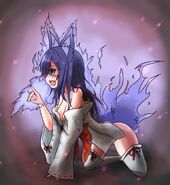 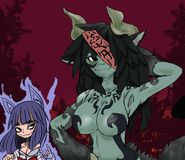 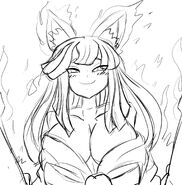 drawn by Mochi
Add a photo to this gallery

Retrieved from "https://monstergirlencyclopedia.fandom.com/wiki/Kitsune-tsuki?oldid=1186701"
Community content is available under CC-BY-SA unless otherwise noted.