Varies wildly, most are very strong

These monster girls have the upper torso of a human woman and the lower half of a snake. Known for living with their own kind in small villages or living stealthily in human settlements, they are extremely intelligent and individualistic.

Those that live in villages with their fellow lamia are known as "wild lamia", they lurk alongside highways, mountain passes and similar areas waiting for a man to pass by. They conceal their lower body, and call out to passing men.

At this time these girls will use their sweet voice, laden with magic, to entice these men, their voice making the man feverish with desire as it resounds within their minds. Men affected by this magic will stagger over to the lamia, at which point these girls will wrap their body in tight coils around the man, stealing away their ability to flee before coupling with them. At this time, even when the man is wrapped in her coils, she will continue to use her enchanted voice to charm him, also, while wrapped this tightly around she will lean in and whisper and murmur, doing her best to tempt the man. Men charmed in this manner will find her serpent half alluring and at this point she will ask him to couple with her.

After this these girls will take you away, forcibly kidnapping you and taking you back to their village as her sweetheart, having become your wife. They can be very forceful and tenacious, always keeping a part of their body entwined about their man. Furthermore, they can be extremely jealous, if their husband ever has an affair they will wrap their bodies all around him, squeezing him painfully until he confesses his crimes.

These girls will also go through a molting process during regular intervals. In the same manner as snakes shedding their skin, they will tear away the old skin of their lower half and cast it aside. Care must be taken during this time, for immediately after molting these girls enter a period of exceptional arousal, lustfully attacking their sweethearts. If approached during this period, they will immediately wrap their newly shed lower half around you and won't take no for an answer, their freshly shed lower half sending them into paroxysms of pleasure as they twine around you.

A lamia coiling her long body around a man's while joined with him. More than anything, lamia family monsters love to coil themselves around a man's body and glue each other together. 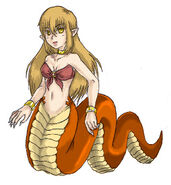 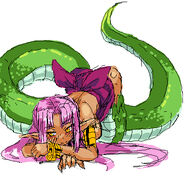 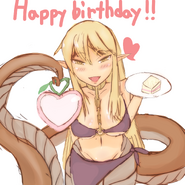 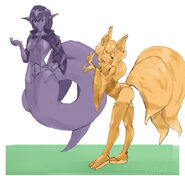 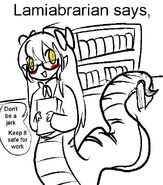 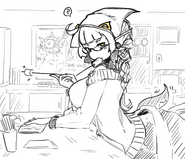 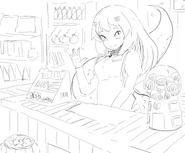 by Vadaboob
Add a photo to this gallery