Large mice are restless, pack monster girls about the size of a human child. They have several unusual propensities, even among the monster girls. Large mice are one of the few species that don't default to monogynous relationships, preferring to share a single male mate amongst the pack. Like dark elves and devil bugs they consider it entirely normal for daughters to have sex with their fathers. And the mice share with werewolves the ability to monsterize human women by biting them.

Some people find the mice's frantic, hasty attitudes quite annoying. Most notably the Queen of Hearts, who went so far as to create an entire new species of calm, sleepy mice so they would stop bothering her.

A beastman type monster that has a small body build and the characteristics of a rat. Since they prefer dark and moist places, they usually live indoors in dungeons, etc. Their size is no larger than the average human child, and while they are not strong by themselves they are very nimble. Also, when they take action, they are always in a pack consisting of dozens of individuals, so by attacking all at once they can even bring down prey that is far larger than themselves.

Of course, when confronting a human man as well, the pack will carry out the assault together while scrambling to be the first to mate. In general they are monsters who can never remain still and are often found running around in circles for no reason at all. When it comes to mating, it is much the same, and when they get turned on, their hastiness causes them to hurriedly rush after a man's body.

They occasionally appear in human settlements to steal food and abduct human men, who are necessary breeding partners. They have a peculiar trait; there is only one man per pack. A man carried away by them will become the center of the pack, and will be continuously violated by overwhelming numbers of them one after another. In the event that the number of individuals in a pack increases too much, the young will leave the group and form a new pack. This pack will then head for a human settlement, seeking a man to serve as the center of the new group.

Rats are often used as magical catalysts, and since they possess the characteristics of rats, they have physical makeup that makes it extremely easy for them to store magic. However,they have no means of utilizing this magic, despite the fact that it can easily build up, and when they store up too much of it, it exerts a powerful influence over them. Their bodies become so hot that they lose control of themselves and go into a lustful frenzy, so they sometimes bite humans and infuse them with the excessive magic.

In the case of human male victim, or a female that has matured to a certain degree, the magic will diffuse inside their bodies after they are bitten. However, in a little girl's case, the magic will remain within her body.

Directly after being bitten there are no significant symptoms, but after a while the girl will become restless like a large mouse, and eventually she will come down with a fever and collapse. At the same time, her body will begin to change, and by the time the fever subsides, she will have changed into a large mouse. Even though the little girl's fever will go down after changing into a large mouse, her body will remain hot and flushing, and this heat will drive her to assault a man. By bearing the man's offspring, she will create a new pack.

Large mice born in the manner described above, and lone individuals who have strayed from their pack, will experience a sudden and dramatic increase in sexual desire. Everything they think and do will primarily be for one purpose: assaulting a man and bearing his offspring to increase the size of their pack. 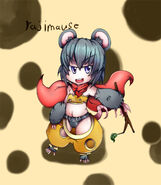 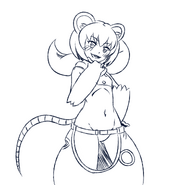 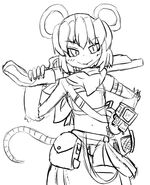 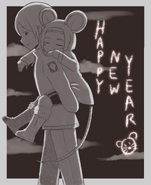 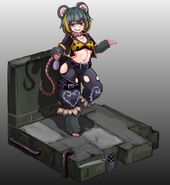 by DaAxem
Add a photo to this gallery

Retrieved from "https://monstergirlencyclopedia.fandom.com/wiki/Large_Mouse?oldid=1170790"
Community content is available under CC-BY-SA unless otherwise noted.