Leanan Sidhes are a race of tiny winged girls from the Fairy Kingdom; aside from fairies themselves, they are the only miniature species that truly is fairy-type, contrasting the imposter pixies and kesaran pasaran. Since the residents of the Fairy Kingdom are not naturally monsters, in principal there may still be some Leanan Sidhe in the Monster Girl Encyclopedia world that are not nymphomaniacally corrupted by Demonic energy. Nevertheless, the monsterization of the fairy races is extremely easy and is proceeding rapidly, so humans are likely to encounter the sexy kind.

These fairies specialise in invigorating the creative spirit and are drawn to artists whom they then inspire to become virtuosos of their craft. As is generally inevitable with monsters, their gifts contain a Faustian barb, as their husbands end up becoming obsessed with their fairy muse and inevitably forsake their careers to spend more time sexing and pampering her.

The in-universe author of the Monster Girl Encyclopedia, the Wandering Scholar, is accompanied on his travels by a leanan sidhe, who apparently fends off other monster girls out to rape him. The text is coy about whether or not this is because she is keeping him for herself.

A type of fairy with a peculiar nature. Aside from living in places such as forests among other fairy type monsters, there are also many who change into human form and slip into human settlements. They love works of art such as pictures, music and stories; and will appear before the human creators of such works after being attracted by them.

They have an extremely unique diet. They touch excellent works of art and feed on the energy dwelling within them. They also love to personally produce art. Aside from creating their own works, they will assist humans they're fond of with their work.

Also, they are very aggressive in romantic pursuits. When one of them takes a liking to a work of art, she will be drawn to the human man who created it, and will try to actively seduce him to become her lover. They appear like very young little girls, but a subtle charm magic is always being released from their body, so the men they target will always feel extremely attracted to them. It is extremely difficult to elude their seduction.

Also, some Leanan Sidhe have become monsters due to the influence of the Succubi. They are extremely lustful, and after becoming a man's lover, they will actively seek sex. Furthermore, they will start to appreciate things such as sensual works of art as well. After enjoying sensual art with their lover and increasing their lust and arousal they very much like to lash out at one another's bodies with that arousal and have sex.

A man who has sex with a Leanan Sidhe has his creative abilities and talents for art skyrocket. Thanks to this power, most such men have become rich and famous. However, their minds are gradually twisted by the charm magic. Eventually, they can think of nothing other than her, and producing works of art to give to her.

Eventually, even the wealth and fame brought by their works will feel like an annoyance, and they will disappear and head off to the fairy kingdom with her. It is said that in the fairy kingdom their life will consist of nothing but producing works of art and making love to her.

This is a leanan sidhe that specializes in literature. She's a bit shy, and the kind of books she loves to read are mostly sensual novels themed around men having sex with fairies. It seems what she's been enjoying lately is having sex with her beloved just like in the books.
Add a photo to this gallery 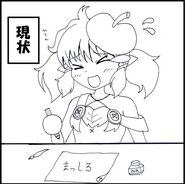 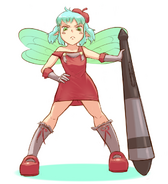 Art fairy is not amused 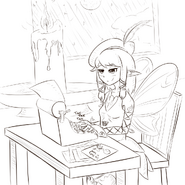 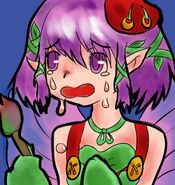 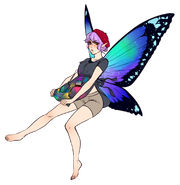 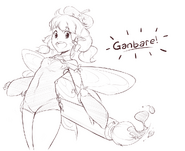 Retrieved from "https://monstergirlencyclopedia.fandom.com/wiki/Leanan_Sidhe?oldid=1166170"
Community content is available under CC-BY-SA unless otherwise noted.