A sudden mutational variant of "alraune", with two women's bodies growing from one flower. Like the original variety, they lure in prey through the fragrance of sweet nectar without moving very much from one spot.

The two women correspond with a stamen and pistil, and perhaps for that reason, they seek one another. Their bodies are always intertwined as they have sex. Due to that, their nectar is riper compared to that of ordinary alraune, its effects as an aphrodisiac and stamina enhancer are amplified and it has a thicker, sweet taste. The fragrance sweetly melts the brains of not only human men, but even women and monsters. If the one who smelled it was a human man, then he'll be lured before the two female bodies having sex inside the flower petals. Even if it's a woman or monster, she'll go so mad with lust that she'll make her hands creep towards her own genitals right then and there.

In a man's absence, the two of them act as if they are in their own little world focused only on each other inside the flower petals, but whether stamen or pistil, their true nature is that of a monster female. When a man goes inside the flower petals where the two are having sex after being lured by the fragrance of the nectar, they'll naturally pinch the man between them, and sex will continue with the addition of the man. When they have sex normally, the act itself and the ripened nectar produced are a means of luring a man, and besides, it also gets them ready to welcome a man inside the flower petals.

They exist in a state of constant sexual readiness, their bodies soaked in thick nectar and pleasure are softly loosened up, their skin feels nice to the touch, and the sweet fragrance exuded makes a man want to suck all over them. Actually, having sex with them will produce sweet pleasure that is like nectar.

As for them, each body has its own separate consciousness and thoughts, but since they're habitually having sex with their other half, they have full knowledge of one another's bodies and hearts, and they can vividly sense how their other half will attack a man next.

Two bodies pinching a man between them, two pairs of arms coiling around him, four lumps of flesh that can freely change shape, two tongues dribbling sweet nectar, and two vaginas that can take turns swallowing his manhood. They coordinate everything perfectly in their movements and attack the man simultaneously, painting pleasure and nectar into every inch of his body and milking semen. After learning the taste of a man in this way, they become so clingy that we can even say they're dependent on the man. Those who become their common husband will not be released from inside the flower petals, instead they will end up as if they have become another part of the liliraune, and the threesome with the two intent on always being glued together will continue.

Perhaps because they're mutants, they're unstable beings. In rare cases individuals are born having the nature of a liliraune, but still having only one woman in the flower. In that case, seeking their other half, they will invite a human woman into the flower petals, and permeate the woman's body with plenty of nectar and pleasure, transforming her into their other half. Also, extremely rarely, individuals are even born with only flower petals and not even a single woman. In that case, they take two human women inside, make them have sex inside themselves, and change them into liliraune. On this occasion, they mostly go after two people that are especially close, or two people that are fighting over the same man. Conversely, in the case of two people that are in love with separate men, the flower will react with rejection and spit them out of the petals.

This time's update is a “liliraune”, a mutational variant of alraune. As a white lily type alraune, they basically come together as a pair, and they go at it erotically inside the flower. At a glance, they seem to be harmlessly off in a world just for the two of them, but it's their cunning trap...!! ((to be continued)) That is why, please check the monster girl encyclopedia profile for details as usual. 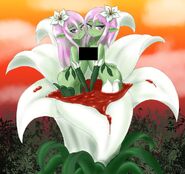 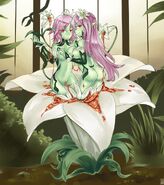 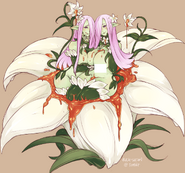 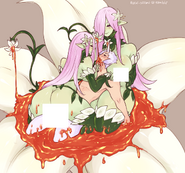 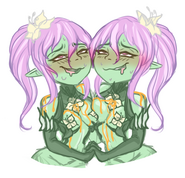 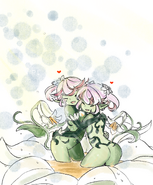 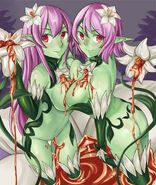 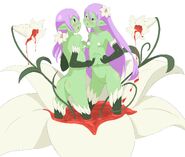 by ibenz009
Add a photo to this gallery

Retrieved from "https://monstergirlencyclopedia.fandom.com/wiki/Liliraune?oldid=1210054"
Community content is available under CC-BY-SA unless otherwise noted.