Matangos are mushroom-monster girls which are largely immobile, at least until they snare themselves a husband. They have a peculiar, parasitic reproductive cycle, whereby the spores they produce infect humans with external mushroom growths. An infected male will find himself compelled to go into the forest and have sex with the matango, whereupon she produces many more spores. If they are inhaled by a human woman, the fungal infection will gradually begin to transform her into a matango from the inside out. This often leads to chain reactions as one infected woman begins to spore and infects others, transforming whole villages into mycological colonies.

A monster mushroom shaped like a woman that lives in damp places in the forest. They stick their roots into the ground or large trees and absorb nutrients through them. Because they put down those roots, they cannot move around. They are very often dazed, since the nutrients that they get from the ground are not enough for activity.

They periodically spread spores from the mushroom caps growing from their body. If a human male breathes in a spore, it will sprout and grow. Once it becomes a large mushroom, the thoughts of the male will be seized by it. Men who end up like this will feel pleasantly giddy, and become unable to think of anything but the matango who scattered the spore and then will naturally head for the matango to have sex with her while being guided by the mushroom within him.

After capturing a man in this way, the matango will absorb semen through sexual intercourse. A matango that has taken in enough nutrients will become active, continuing to have intercourse with its prey and sending out even more spores. Men who have sex with the matango for a long time will have many spores planted in their body.  When mushrooms start to grow on the men’s outsides, they turn into a “mushroom person” whose mind is full of thoughts of having sex with the matango.

When reproducing, they can't increase in number with spores alone. In order to give birth to a new matango, they need to cause a human women to inhale a spore. If this happens then the spore will grow inside them just as with men. The mushroom, having grabbed a part of the woman’s mind, will drastically increase her sexual desires, making them attack men and absorb their semen. This makes the mushroom grow rapidly, and it soon changes the woman into a matango. If a woman in a village breathes in the spores, that village will soon become a “Village of the matango.”

Furthermore, while it has been presumed that matangos can't move on their own, recently matangos that have received plenty of nutrients from men have stopped rooting themselves in the ground. They've even been observed moving by being carried by their men while having their roots entwined around them. (However, they remain joined with their men and it is said that they continue having sex even right in the middle of moving around).

The first stage when a human woman transforms into a matango. The inside of her head is already full of mushrooms, and she'll assault a man to fill her vagina with a large mushroom as well.

From After-School Alice Tale
Add a photo to this gallery 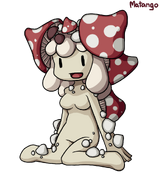 Matango by RainDante
Add a photo to this gallery

Retrieved from "https://monstergirlencyclopedia.fandom.com/wiki/Matango?oldid=1208331"
Community content is available under CC-BY-SA unless otherwise noted.