A high level type of Lamia, which possesses the upper body of a human woman and the lower body of a snake. They are very few in number, so they mostly live by themselves. Perhaps for that reason, they are awfully lonesome; but because of their extremely prideful and strong-willed personalities, they normally do not show it.

They possess the ability to cause the body of whomever they make eye contact with to harden like stone. Besides catching their prey animals with this ability, they also use it to stop a man from moving so they can drag him back to their lair as their husband for reproduction when they find a man who strikes their fancy.

They also use this ability during sex. In this case only the man’s limbs are petrified, to prevent him from moving. They also are likely to restrain him with their snake bodies while forcing intercourse. Since they are such extremely lonely girls by nature, when they are joined with a man and embraced in his arms, they may petrify his arms and legs to prevent him letting go of them. After sex has ended they may even petrify a man's penis and try to have sex with him again because they do not want to be separated from him, or so it is said.

The vagina of a Medusa can provide the penis with two different types of stimulation: a squeezing that is pleasantly cool like stone, and conversely, a lukewarm feeling when they begin to seek their man even more and squeeze more desperately. The pleasure provided is likely to be more than sufficient to enthrall a man.

Living things petrified by their ability never die from it. It can be healed if the Medusa undoes it herself, or with one of the magic items or medicines circulating through the marketplace. Also, if they leave a man petrified without choosing him as a husband, generally, before the petrification wears off, another monster starving for a man will carry him off. Then just when the petrification does wear off, he will find himself having sex with that monster.

A Medusa’s hair turns into snakes from the middle. Each of them can move freely, but since they share the same will as the Medusa, if she isn’t hostile, there’s probably no worry of being attacked. Medusa are stubborn and pretty much never show their true feelings, but the snake hairs are different from the main body and reflect their feelings and consciousness as is. For that reason, the hairs are straight-forward, just the opposite of the stubborn main body, they will aggressively wrap themselves around a man they like and snuggle up, so it is possible to discern the true heart of the Medusa from the behavior of the snakes.

Also, just like the Lamia, they are extremely jealous. If a man were to cheat on a Medusa, he would end up being left petrified for days with his wife coiled around him and roughly milking him by constantly having sex, so be careful.

A Medusa enjoying a hot spring. 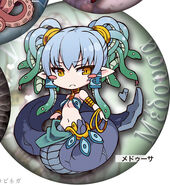 A medusa's snake hair is like a mirror reflecting her heart. Even if she turns away, the snakes won't let go of a man, and will twine and coil around him.
Add a photo to this gallery 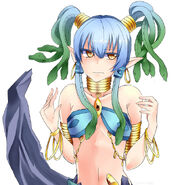 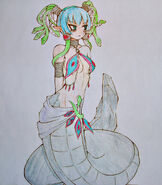 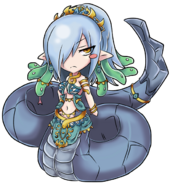 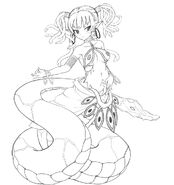 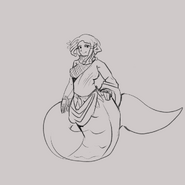 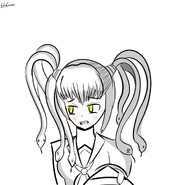 Retrieved from "https://monstergirlencyclopedia.fandom.com/wiki/Medusa?oldid=1186822"
Community content is available under CC-BY-SA unless otherwise noted.