Towers and caves, anywhere chests can be found

Mimics are monster girls that disguise themselves as treasure chests, waiting to leap out and rape unsuspecting adventurers. What seems no more complex than a rapist hiding in a box in fact disguises various substantial practical problems about ergonomics and locomotion, leading Wandering Scholar to propose that mimics have powerful illusion, teleportation and pocket-dimension-hopping abilities.

The basic mimic has two subspecies: the Jinn of the Jar, who just uses a different-shaped disguise, and (more esoterically) the Charybdis, who hides in a big barnacle on the sea floor.

Monsters with the ability to set a trap by mimicking treasure chests; they live in places such as towers and caves.

In dungeons that adventurers visit, they blend in among the treasure chests and wait patiently for a man to open it himself. They have magic that can teleport themselves to other locations, While I am not sure about their source, they can get information about dungeons that have a lot of traffic, dungeons that have rare treasures etc. and even move from place to place based on that information. Since they may rarely slip into houses or castles, one should never let his guard down even with treasure chests outside of dungeons.

When a human man who will become their prey opens the treasure chest, the mimic will leap out with great force and startle the man; then use a charm or binding spell to seal his movements. Then, as if to present themselves as a treasure chest, they show off in front of the man while undoing their own ribbon and exposing their naked body. They will offer their body to the man along with plenty of pleasure, while milking out his Spirit Energy to feed on.

If the man strikes their fancy, he will be dragged inside the treasure chest. The man dragged inside will disappear somewhere, and the only thing remaining will be an empty treasure chest. According to one explanation; the inside of their treasure chest is a space they have created with magic, that exists within a different dimension. It is said that they will continue to have sex alone together in that place, where they will not be disturbed by anyone.

Their weak point is the keyhole of the treasure chest. If a key corresponding with the keyhole were to be inserted before the mimic jumps out, she would be spit from the chest and the chest she was within would disappear in a flash of light.

Due to the disappearance of the chest, the mimic would lose her magical energy and become completely powerless. It would probably be possible to capture her. However thus far, a key corresponding to the keyhole has not been discovered. It is said that even when a skilled thief attempted to pick the lock, it still would not open.

However, on one occasion, there was a man who succeeded in unlocking the chest by inserting some kind of pole-shaped object, other than a key, into the keyhole. According to that man, the moment he unlocked it, the mimic clung to him for some reason and he ended up being joined with her. The mimic became very submissive and she would do anything he asked; so he took her home with him. However, she may have needed to replenish her Demonic Energy that she had lost with Spirit Energy, as she was far more lustful than an ordinary mimic. She was always wanting to offer her body to the man, it is said that she even ended up begging him to ravish her. It could likely be said that the man literally obtained a mimic by unlocking the treasure chest that the mimic was inside. 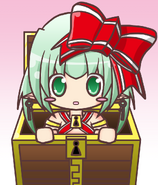 Dragon Mimic (Brave Frontier) as a Monstergirl by TheToxicGemstone 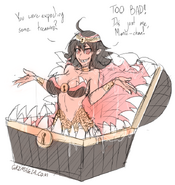 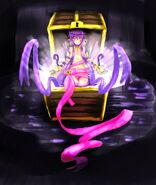 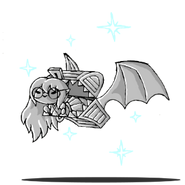 Metal Mimic from Brave Frontier as a chibi monstergirl (by Mihai) 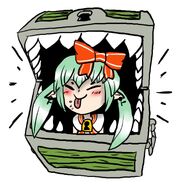 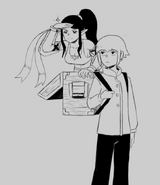 Retrieved from "https://monstergirlencyclopedia.fandom.com/wiki/Mimic?oldid=1162954"
Community content is available under CC-BY-SA unless otherwise noted.