A kind of Werecat that only inhabits the Zipangu region. They possess high magical power and are distinguished by having a tail split in two. Using their magical power, they can change into the animal form of a cat. Similar to other races unique to Zipangu, they have lived among humans as neighbours since ancient times. Even in human settlements they can often be seen in both their cat form and their original form.

When they find a man who strikes their fancy, they don't attack right away; they change into the form of a cat instead. Hiding their true form, they approach the man and use charm magic which causes the man to keep them as a pet. Once this is done, they can live together with the defenseless man and are able to ascertain whether or not he would treat them with love and kindness. In the same way as an ordinary cat, the following behaviour can be observed: "When the man moves closer, they move away. When the man moves away, they move closer." The reason why they move away when the man moves closer is that although they really like being touched and hugged, they also get turned on by the man's body heat and odour; it might even cause them to revert to their original form and assault the man on the spot. On the other hand, they move closer when the man moves away because it makes them feel uneasy when the man grows distant. It is said that they rub their body against the man, leaving behind their scent and demonic energy in order to keep other monsters from approaching him.

In this way they try to hide their true form, but when they're living with a man they eventually become unable to suppress their instinct as a monster and they end up sexually assaulting him. When they break down and sex happens, it becomes more passionate or more frenzied and obscene the longer they spent living with him and the longer they had to endure it.

Once their true form has been revealed, it is no longer necessary to hide their true nature or to control their lust towards the man; they will aggressively rub their bodies against the man and fawn on him regardless of which form they are in. After spending plenty of time enjoying the man's scent and body heat in this way, they get totally aroused by it. While their body is hot, they have sex with the man and indulge in the taste of spirit energy and pleasure.

Nekomata are often misconceived as being "a cat that lived a long time and obtained demonic energy, thus becoming a monster." In the eyes of the men who were assaulted by nekomata it looks like their pet cat suddenly changed into a nekomata one day, but the truth is that their cat was a nekomata from the beginning. 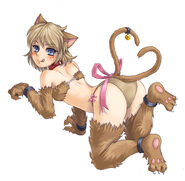 Illus for this story 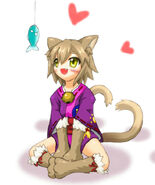 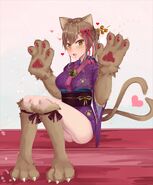 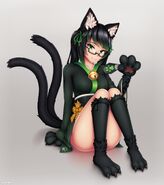 The ecchi unagi is a fish native to Zipangu, notable for it's delicious taste and tendency to spew a thick slime if touched even slightly.