Aquatic monsters known as “daughters of the sea.” They're a kind of sea-loving succubus that inhabits the ocean. Women who drown in the ocean and have their bodies completely violated by the magical power of the sea god Poseidon are changed into nereids. Normally they are calm like the sea, and free-spirited, but when they have sex with a man they go wild like a stormy sea and indulge in the pleasure.

When human women are changed into “nereids” from having their whole body violated by Poseidon’s magical power, they are overcome with waves of strong pleasure and sexual impulses. Due to this, the restraint and repression they had as humans is completely swept away. They get a sense of freedom that they never experienced as humans, and become filled with happiness. Then their body and heart become that of a monster's, and they start thinking of life in the sea as the ultimate happiness. If a woman who was changed into a nereid had a man she loved on dry land, she will change herself into a human form, and go onto land to seek him out. Then, using her monster-transformed body, she will seduce the man, and sink him into the depths of pleasure, as if he were sinking to the bottom of the sea. After capturing the man in this way, the two of them will return to the sea.

Nereids who bring back men mostly keep having sex with their beloved husbands at the bottom of the sea. At the bottom of the gentle, quiet sea, the only existence they can sense is their beloved man. Undisturbed by anyone, they repeatedly have violent sex with the man like a storm. The days spent ascertaining one another's violent, yet gentle, love daily are the happiest days of their lives to both of them and the men who became their prisoners.

However, unmarried nereids who haven't gotten a man come up near the surface of the water, so they are very dangerous beings. Besides trying to drag men they like into the sea, they do the same to women in an attempt to change them into nereids in order to share the feelings of liberation and happiness that they have obtained. 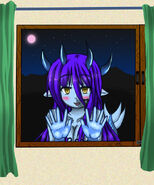 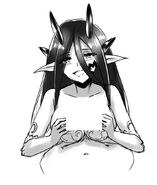 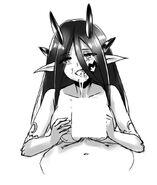 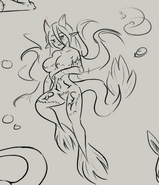 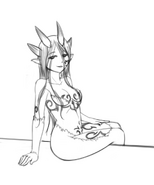 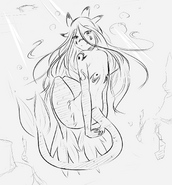 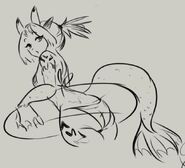 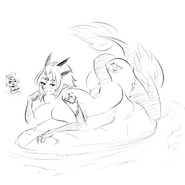 by Shunyuan
Add a photo to this gallery

Retrieved from "https://monstergirlencyclopedia.fandom.com/wiki/Nereid?oldid=1169309"
Community content is available under CC-BY-SA unless otherwise noted.