A type of centaur, having the upper body of a human and the lower body of a horse. They possess high magical power, using spells to go into people's dreams while they're sleeping. They don't inhabit any specific type of place, and it is very rare to encounter one outside of a dream.

Although they belong to the centaur family, they feed on the spirit energy of human men like succubi do. When they find a man they like, they enter his dreams, appearing in the form of a voluptuous, strong-willed woman, and seduce him. They'll move their hips as if they're used to it and alluringly copulate with the man, providing excellent pleasure and milking plenty of semen. In contrast with the man, who will be ecstatic after ejaculation, they'll smile charmingly with their semen-covered face and gulp the semen down loudly. After appearing in a dream like that, from then on they'll continue to visit in the man‘s dreams. He'll keep having passionate sex with them every night and have his spirit energy milked.

However, so long as one realizes he‘s being attacked, it would be easy to capture her. Because they approach sleeping men, all one would have to do is pretend to be sleeping. They would approach to try and enter the dream without realizing that the man isn't asleep, and then they could be captured on the spot. When captured they're nothing at all like they were in the dreams. These monsters have nervous, timid, and cowardly personalities, and they'll likely freeze up from the shock of having the man they thought was asleep suddenly grab them, combined with the embarrassment of being touched in the real world by the man they love.

Since they can't attack men in the real world due to having such personalities, they play the role of what they think is an ideal woman and have sex with men in dreams. Being docile, they hardly resist at all after being captured, and they're only there in the first place because of their strong fondness for the man, so it's easy to tame them.

Although they appear completely different than in the dreams, after having tasted their body and demonic energy thoroughly, a man’s body will naturally throb in reaction to the girl he has been having sex with every night, and he‘ll lust for her. After having been immersed in pleasure every night, the man will be enthralled by her, so he'll naturally do the same thing they had been doing every night and attack the frightened girl.

Of course, in reality, sex with them is nothing like how it is in the dreams. Her hip movement will be awfully awkward, and she'll be overwhelmed by the pleasure she receives from the man. She'll just keep frantically shaking her hips to try and swallow his penis deeper inside. Tears will come to her eyes as she’s showered in semen, and her expression will be tinged with ecstasy.

From the look of it, rather than her milking semen, it's more like she's having her body violated and sullied inside and out by the man's semen in a sticky mess. And when the semen rains down and splatters all over her body, just like a dog that had been enduring hunger, she’ll focus on licking it up, and with every mouthful she licks up, her expression will melt because of how delicious it is.

They’re so very different in appearance from how they were in the dreams. However, just like the body that the man had tasted every night, it's the body of a monster, which a man will find irresistible; and just the same as in the dreams, sex will result in exquisite pleasure and enthrall the man.

One example of the woman, meant to arouse the man and be considered "perfect" by her target, given by a man who had been attacked by a Nightmare.
Add a photo to this gallery 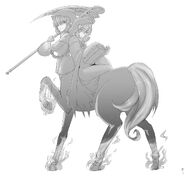 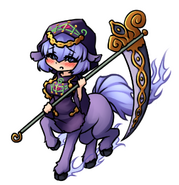 Retrieved from "https://monstergirlencyclopedia.fandom.com/wiki/Nightmare?oldid=1166176"
Community content is available under CC-BY-SA unless otherwise noted.