Ferocious, dangerous monsters distinguished by their green colored skin and the horns growing out of their foreheads. As suggested by their appearance, they have crude, warlike dispositions. They’re always wandering mountainous regions, caves, and wastelands, etc. seeking men. Besides that, they are also often seen where humans and monsters battle. They use their superior physical abilities to go on a violent rampage, and then carry away their men after they’ve beaten them down.

They’re constantly thinking about raping men. Should any strike their fancy, an aggressive sexual assault will take place. They try to fulfill their desire through violent sex. They love conflict and having sex with them is almost like fighting a battle. As if to compete with each other to see who can break a man sooner, they are likely to mercilessly beat pleasure into their men in order to bring them to climax as quickly as possible. It gives them pleasure and spurs their fighting spirit, setting them on fire, if their men hit them back, the viciousness of their assault will probably increase, as they try to give their men more and greater pleasure.  Whatever the case, once they get started with sex, it won’t end until either they or their partners are beaten into submission, no longer able to move. Until victory or defeat is decided, they will continue, but that’s not to say that they would let a man go should he choose not to resist. Those who don’t put up a fight are viewed as weaklings who deserve to be violated by the strong, and the one-sided abuse and rape will continue. Furthermore, once they feel they really like a man, they won’t ever let him go. They are the victors and they’ll rape a defeated man whenever they please, continuously violating him with violent pleasure.

Once captured, the only way to escape is to fight them and win. In other words, a man must give them so much pleasure during sex that they become unable to move, then, while they're out cold, he must run away. If a man isn’t quick enough during this time, they’ll probably soon revive and push him down, demanding a rematch since they have such great stamina. At this point, if they lose again, they oblige themselves to become a man’s sex slave and prisoner. Once they’re burning with more love and passion, the sex with them reaches new heights, becoming so intense that everything before pales in comparison.

TL Note: The book profile was judged to not have anything different enough from the online profile to translate. So we only did the extra art caption. 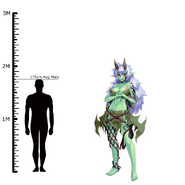 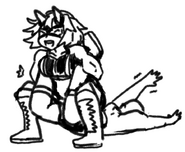 Retrieved from "https://monstergirlencyclopedia.fandom.com/wiki/Ogre?oldid=1162969"
Community content is available under CC-BY-SA unless otherwise noted.