Otohime are a type of aquatic Dragon Monster Girls from the Japanese themed Zipangu Region, where they rule over its underwater kingdoms. As befitting a dragon, the Otohime possesses godly powers, which they can use to control the seas. While they love excitement and parties, Otohime are nontheless well-behaved and dignified Monsters, like their Ryu cousins, and are likewise worshipped as deities by some humans.

Monster princesses that rule over “ryugujo” which exist at the bottom of the sea in the Zipangu region. They are treated as mermaids, but they're actually a kind of powerful dragon that possesses the power to manipulate sea currents and cause tsunamis. Depending on the area, they are worshiped as gods of the ocean. They are selfish and overbearing, but also have tolerant and easy-going personalities.

Since they present themselves towards anyone in a familiar and playful manner, they are adored by their monster underlings. Having pleasure-seeking personalities, they like to enjoy themselves every day above all else. Other than that, they also enjoy entertaining others. “Ryugujo” have become places where those who live there can enjoy themselves without getting bored and have also been opened to the outside as amusement cities. Sometimes, they send messengers to the surface to invite humans.

In “ryugujo”, guests are always welcome and drinking parties unfold day and night. Many monsters entertain guests, dancing beautifully, then bringing the fascinated men into their bedrooms. The otohime, who are at the center of these banquets, are outstanding dancers themselves. The sight of them dancing is so beautiful that it momentarily dazzles those who watch, making them forget the passing of time. Through dancing, the ostentatious exhibition of their sublime, powerful draconic form, as well as their womanly form, which is so graceful and beautiful that they might well be mistaken for celestial nymphs, compels observers to recognize them as beings which ought to be revered.

However, despite this sense of mystique given off by their appearance, as a matter of fact, they merely dance to entertain themselves as well as those who watch. Also, if there is a noteworthy man among those observing their dance, they'll bring him into their bedroom, as if to say their position as princess is irrelevant.

The men they desire as partners are companions who have the greatest reactions to what they do and won't bore them, such as men who thoroughly enjoy it when they decide to entertain them by taking them around ryugujo, which they are very proud of, and men who overreact to having their body teased. On the other hand, no matter how lacking and weak a man's responses may be, as he spends time with the otohime, which have a powerful charm as female creatures, eventually every little thing they do will drive him wild with lust. Sex with them is like a service to entertain the man, and he'll have a maximum reaction by releasing mana during their lovemaking, thus changing into an ideal husband to them.

Most men who visit ryugujo will end up choosing to live with monsters as their partners, however, there are also those who are intent on returning to the surface. Such men are given souvenirs known as “tamate- bako". When a man opens the box, imbued with a spell by the otohime, magical smoke spills out and envelops him, showing him an illusion in which he can relive the paradise-like days at ryugujo. Furthermore, besides just re-experiencing the same things, he is also shown all the other ways to enjoy himself at ryugujo that he didn't get to experience during his visit, and if there is a monster who was really into him, it is said that he'll experience a simulation of the pleasure of sex with that monster that he still had yet to taste.

Because of this, the disparity between daily life and the paradise-like days at ryugujo will make him feel old, and he'll then long to visit ryugujo once again. Shortly thereafter, someone from ryugujo will once again appear to welcome him.

This time it's a race that was also first included in the new book “Monster Girl Encyclopedia II”, “Otohime”-san!

They are princesses of the sea monsters, who rule “ryugujos” and hate boredom and love fun things. In the amusement cities, “ryugujo”, the sea monsters dance and entertain the guests who were invited, but these girls, who are their rulers, also dance beautifully.

Apparently, they invite fascinated men, saying “hey, come closer,” and then they'll take them around the dragon palace city they're proud of, and bring them into their own bedroom.[1]

TL Note: There are multiple ryugujos ruled by different otohime. The facilities in the castle towns and the events held in them differ by the taste of the rulers (otohimes) or nature of the denizens.[1] 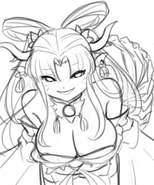 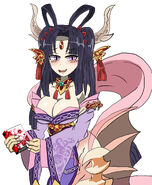 Retrieved from "https://monstergirlencyclopedia.fandom.com/wiki/Otohime?oldid=1165486"
Community content is available under CC-BY-SA unless otherwise noted.