A higher rank variety of “ghost” born from demonic energy bound with the soul of a human who lost their body, that stand out among others as having especially strong mental power. In the kingdoms of the undead (andeddo), “the lands of the undead (fushisha)", they are treated as nobility. Also, it is said that a ghost may transform into a phantom by having sex with her husband a countless number of times, sipping his spirit energy, and continuously storing up demonic energy.

Their bodies are spiritual, and given form by demonic energy, and they can slip right through the walls and ceilings of buildings, allowing them to appear from anywhere and launch an assault on human men. Additionally, since they inherently possess just enough demonic energy to materialize, they are freely able to touch or be touched by humans and physical objects if they wish so, and so it is possible for them to have sex with men without any issues.

At a glance, they appear to have an elegant and dignified bearing suitable for a noble, but these beings are full of obscene thoughts. Just like ghosts, their thoughts are tainted by wildly indecent fantasies of men. Unlike ghosts, which think only vaguely and tend to be driven by fantasies of sex with men, their wild fantasies are about more than just sex and involve a story featuring a man that plays out just like a drama. It's said they enjoy these visions while clearly conscious, and since they're always immersed in their own world, they behave in an exaggerated theatrical manner as if they were an actress.

Like ghosts, they possess the ability to share their thoughts with others being possessed by them and they even have the power to transmit their own fantasies. When they spot a man who strikes their fancy, they use this power to drag the man into their fantasy world, and then whisper of love and tempt him to have sex.

This power blurs the line between fantasy and reality for the person to whom it was transmitted, and it's so powerful that the man will be convinced that he's actually one of the characters in their fantasy tale. It's even said that sometimes, it not only affects the man who was targeted, but the people around him as well, dragging them all into the phantom's wild fantasy.

Additionally, their extremely powerful thoughts don't just remain inside their head, instead producing illusions which correspond with the tale they are creating and direct reality according to their desire, as if it were a play. Due to that, they can even freely manipulate the atmosphere of a situation on the spot, and men swallowed up by the atmosphere produced by them will feel that their encounter was predestined, and may even feel that marriage is an inevitability.

Men even more deeply incorporated into their tales will act out their scenarios with them; sometimes they'll become a knight and princess whose love is forbidden, and sometimes, they'll become lovers who are being torn apart by a family feud. All according to the phantom's scenario, they'll end up being joined together and have sex by the tale’s end. When the program is finished, the man's body will already be engraved with the memories of sex with the phantom and pleasure. Even if it took place within a vision, the love fostered between the two of them will definitely feel real, and it will remain without disappearing. It would likely be impossible to avoid the fate of becoming a married couple.

Among the undead of the “land of the undead", an artistic culture flourishes, and within these kingdoms there are a great number of theaters. Phantoms lurk in the theaters along with “troupes without men" comprised of undead, lying in wait to claim stray men as their own.

This time's new race is a higher rank variety of ghost, the nobility of the land of the undead, “phantom”-san! The ghost's “habit of fantasizing” has further accelerated, and apparently various tales unfold within their minds. When they open their mouths, exaggerated theatrical dialogue like something an adolescent girl would come up with comes flying out, but its professional quality. Supposedly, they can even project their wild fantasies into reality as illusions, dragging in everyone around them and putting them on the same pace as them.[1]

An example of how Phantoms talk (From Kenkou's twitter):

“Kukuku... As a minion of darkness (true), I shall protect you. Haven't you noticed? You are being pursued by the organization (actually Sabbath)”[2] 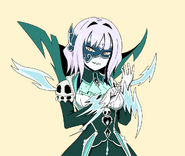 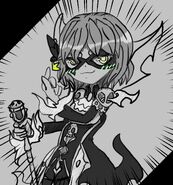 By Skai_Art
Add a photo to this gallery

Retrieved from "https://monstergirlencyclopedia.fandom.com/wiki/Phantom?oldid=1209885"
Community content is available under CC-BY-SA unless otherwise noted.