Mutant slimes that are called slime queens. As the name suggests, the main body is a "Queen" found at the center, surrounded by several divisions who appear to be "Servants". It almost looks like a group of slimes close together, but it’s actually a single monster.

The typical slime's ability to divide is flawed in their case. They can’t store up sufficient nutrients while dividing and as a result, they have become bloated. The divisions have different abilities than the main body, but all are under the control of the main body, the "Queen".  Their consciousnesses, thoughts, and memories are all shared in common.

In the same way as other slimes, they are fueled by men’s semen. Once they’ve spotted prey, they use their sticky body to wrap around a man and initiate sexual intercourse, taking in semen. However, because the main body is bloated, her movement is extremely slow and sluggish. For that reason, when initiating sex they send out their “Servants” to charge in aggressively, insuring that sexual union takes place. Because of how immense their bodies are, they are much more greedy than a typical slime. Once a man is taken in by them, his fate is to spend the rest of his life continuously having sex in the middle of a harem of them.

Queen Slimes who continue to have sex with men grow in such a manner that they become almost like a village of slimes. Then they are referred to as “Slime Kingdoms.” As the size of the body of the queen itself becomes more and more immense, the intelligence of her divisions sharply rises. Divisions with various duties will begin to appear such as knights and mages to defend the queen and her man, huntresses to procure food for the man, and merchants to trade with other races.

As their intelligence continues to increase, the number of divisions increases, and even those with no specific duties will appear, such as divisions resembling the man's elder and younger sisters. (If I must say it, their duty is probably to have sex with the man, though.)

However, no matter how intelligent they appear to be, and no matter how many various divisions appear, their actions are fundamentally driven by instinct. These instincts are the drive to feed (have sex), and the drive to further expand the slime kingdom. Most of the goods they trade for with merchants are medicines or items that increase the stamina of men.

Furthermore, since the queen and her divisions will only have sex with the man who is the king of the slime kingdom that they've acknowledged as their husband, one would think that slime kingdoms would be safe since they have a man. However, once a slime kingdom grows large enough, other monsters will sometimes start to live there as well. The kingdoms are thus extremely dangerous, especially because its hard to distinguish between ordinary slimes and the Queen's divisions.

As they continue to grow, divisions with various duties will be produced. Every one of them will want to have sex with the man who is king, and all of them belong to the king.
Add a photo to this gallery 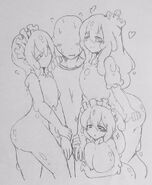 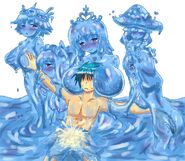 Retrieved from "https://monstergirlencyclopedia.fandom.com/wiki/Queen_Slime?oldid=1180573"
Community content is available under CC-BY-SA unless otherwise noted.