A race of goblins with a child-like form, distinguished by the red cap they wear that appears blood-stained, as the name suggests. They continuously accumulate an extreme lust that boils up ad infinitum, and they're constantly driven by the urge to violate men.

They always glare at men and grin with their desires and urges laid bare. These are extremely ferocious monsters who assault men. They lurk in places such as ruins and relentlessly stalk the human men who will end up as their prey, employing tactics such as lying in wait to ambush a man and attack precisely the moment when their target is alone and defenseless.

Contrary to their child-like appearance, they display terrifying aggression when assaulting a man, mercilessly slashing at him with the weapon in their hands. Their weapons, made from demon realm metal, injure their foe's spirit energy, rather than his body, and instead of hurting, the wounds grow hot and throb. There are no external wounds, nor is it life-threatening, but if seriously wounded, the body will be immobilized for a while. They prefer to one-sidedly rape a man after slashing him up and depriving his body of freedom. The manner in which they have sex is incongruous with their petite body; they straddle a man as if mounting a horse, taking his penis deep inside, and then they drop their hips again and again as if crashing into him, inducing pleasure in a man that's even violent. The gasps and moans escaping a man's lips will greatly satisfy their urges and elevate them to even stronger excitement.

Even if a man releases semen, their urges won't subside, and despite him being in the middle of ejaculation, they'll further strengthen their hip movement, with a single-minded focus on continuously attacking a man, indulging in pleasure and spirit energy. Men who fall into their clutches will be brutally milked of spirit energy in that manner and end up having sex until they pass out.

Their demonic energy becomes more thick, gooey, and red in proportion to their desires and urges, and it is their liquefied demonic energy which also drips from their weapon. Actually, their caps are white to begin with and become stained red when this spirit energy soaks in. In other words, the more their desires and urges build up from being unable to vent them by having sex with a man, the deeper the red color of their cap will be, and their ferocity increases in proportion to it. Due to that, the only individuals who appear in front of men who will end up as their prey are those with caps stained red since they don‘t have a specific husband.

On the other hand, the red stained caps of individuals who, by obtaining a husband, having sex again and again, and having spirit energy continuously poured inside them; have had their desires and urges satisfied, and will regain their original whiteness. When their cap is in a white state, as a lingering effect of having been filled with human spirit energy, they will appear to be intoxicated, and most will seem merrily spaced out; there is no apparent ferocity or aggression as in their red state. The expression in their eyes as they look at their husband also becomes a soft one filled with love. For example, even with their husband next to them, they would only smile at him like a little girl in a manner suitable to their appearance and snuggle up to him, and they would never do something like rape.

However, having obtained a specific partner, their desires and urges will grow even bigger and stronger, and they'll become unable to endure it. The urge will soon swell up and dominate them unless they are constantly immersed in ecstasy, basking in the afterglow of sex with their husband by having spirit energy relentlessly poured inside them. If one were to skip even just a little bit of sex because they aren't attacking, their cap would suddenly be stained red, and their husband would end up being thoroughly ravished like when they first met.

This time it's a race that wasn't first revealed in Encyclopedia II, the new race “Redcap”! Encyclopedia II included up to No. 200, so this girl is the 201st race. They have a somehow dangerous aura, a dangerous look in their eyes, and carry a dangerous specialized weapon, and they actually are dangerous! If they spot a man, they'll slash him up, violate, and milk him! (The weapons are made from mamono realm metal and don't inflict pain or external wounds, so relax.) Their terrifying looking caps that appear blood stained are their distinguishing trait, but these caps may have a secret or something...[1] 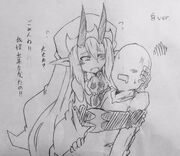 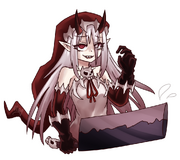 Some fanart for Redcap. 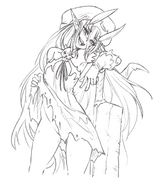 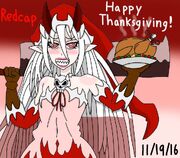 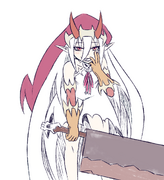 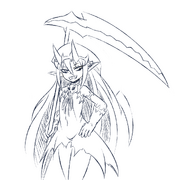 Retrieved from "https://monstergirlencyclopedia.fandom.com/wiki/Redcap?oldid=1209618"
Community content is available under CC-BY-SA unless otherwise noted.