A kind of Beastman peculiar to the Mist Continent, distinguished by having black and white fur. They have a large body, but a gentle disposition and a sociable personality, and they take kindly to people, so naturally they have a mysterious charm that many people are fond of. This especially applies to men. Just looking at their adorable but at the same time sexy appearance and mannerisms is tantalizing enough to cause agony.

They have a rare feeding habit of mainly consuming bamboo leaves and sometimes they even walk around holding bamboo while munching the leaves all day long. Perhaps for that reason, they excel at handling pole-shaped things, and there are even individuals who can perform martial arts using a Bo staff.

They're extremely curious and enjoy any kind of fun game or interesting thing, but they especially like playing with men. As for playing "with" men, of course they also love playing "with" the men themselves. Although they normally do exhibit gentle and amiable behavior, once they've found a man they're fond of and "the most fun thing of all" is within reach, their eyes will light up ferociously in the manner of a Beastman stalking its prey as they approach him. And then, unable to endure their skillful "pole" technique that involves fondling it and taking it inside their mouth, the man being forced to "play" with them will end up entertaining them by ejaculating semen.

While they're absorbed in playing with a man's body, they often become highly aroused. Once their play becomes serious, they recognize that they want to make the man their husband and become pregnant with his offspring, then these lustful greedy beasts won't release the man until their womb becomes full of semen.

There's more to why they're charming to people than just their outward appearance and mannerisms. Once a man learns the taste of their soft lewd body, which is meant to be loved by a man, he won't even be able to think of letting them out of his arms.

Since they have a charm that attracts people, the Demon Realm states and Monster friendly states of the Mist Continent often dispatch them as diplomats when establishing friendly ties with states that view monsters as suspicious. In most cases, they're able to greatly exhibit their own charm and friendliness in the place they've been dispatched. Then, if the men of the country have sex with them, they will be completely won over, and the people's attitude will change towards accepting monsters.

Of course, that's not their main intention at all. It seems what's in their head is finding a husband in a fun and pleasurable manner.

This time it's another one from the mist continent, the black and white panda monster girl, "Ren Xiongmao"-san.

I think the name will be unfamiliar, but it comes from Chinese "ren (human)" + "panda= xiongmao (bear cat)". 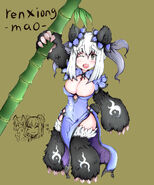 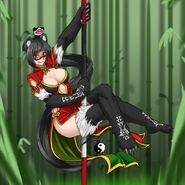 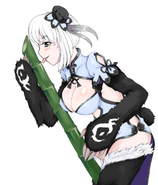 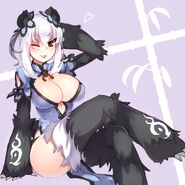 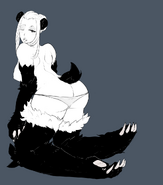 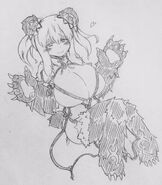 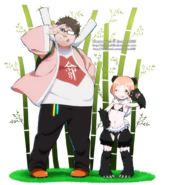 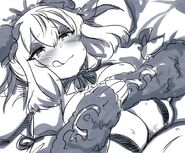 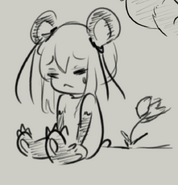 by nyanbacon
Add a photo to this gallery

Retrieved from "https://monstergirlencyclopedia.fandom.com/wiki/Ren_Xiongmao?oldid=1182093"
Community content is available under CC-BY-SA unless otherwise noted.