Sea slimes are unusual, solid in form, members of the slime family that live in the seas of the Monster Girl Encyclopedia world. Like their parent species, they are mainly spermivorous and newborn sea slimes can set about searching for human men from the moment they bud from their mother.

A variety of slime adapted to life in the sea. Although it is classified as a semi-liquid type like other slimes, its form is fixed and cannot be changed freely. Perhaps this is so its body won't be washed away. It is able to use its skirt-like bell for swimming, but it prefers to drift about underwater, letting the current carry it.

While they do wash ashore on rare occasions, a sea slime is more likely to be encountered when she becomes tangled in a human fisherman’s nets. Either way, once a human man passes near by, she'll spread her legs and bell wide to tempt him into having sex. She seldom needs to chase her target; fishermen on a long sea journey tend to be starved for female affection and are unlikely to resist her charms. While having sex, she gets strongly swept away by pleasure as if swept away by the ocean while swimming. If a man just violates her body and has his way with her, she'll receive that pleasure with her entire body, and she'll also react by twisting her body and shaking her hips as if to match it by returning the pleasure to the man.

Even during sex, sea slimes may appear to be docile, however, once a man gives into temptation, she will not allow him to stop prematurely. Should he try to pull away, countless tentacles will emerge from beneath her bell to inject him with paralytic poison. She will then start rocking her hips back and forth violently to produce pleasure in place of her immobilized lover, and will not release him until she is satisfied or he faints from exhaustion.

Like her land-based cousins, a sea slime’s main food is human semen. Any energy she doesn’t need is stored within her bell. When it accumulates to a certain level, division occurs, and the bell part will become a sea slime larva. A sea slime larva does not have a bell, and her lower body is completly exposed. This makes it perfectly convenient for her to mount the man whose semen she was created from and receive his penis inside. She will then do her best to squeeze out his semen with her tiny body.

Normally they drift in the sea and let the tidal current carry them, but once they spot a man, they go against the current and slowly float towards him as if drawn to him
Add a photo to this gallery 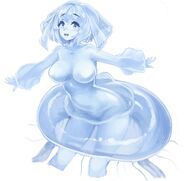 by Barbariank
Add a photo to this gallery

Retrieved from "https://monstergirlencyclopedia.fandom.com/wiki/Sea_Slime?oldid=1164925"
Community content is available under CC-BY-SA unless otherwise noted.