A type of Harpy with a beautiful singing voice that absolutely loves singing.  Their songs are infused with a lot of magical energy, and men who hear them become entranced by it and end up moving in the direction that they hear the song coming from.  Most sirens live near the ocean, and due to this many ships have disappeared mid-voyage, never-to-return, after the men aboard were lured by their songs. Thus sailors are very fearful of them.

They choose their prey from among the men who were drawn to them by their songs, but in this case, they aren't the only threats.  Most of the time, all kinds of monsters who are after the men are lurking nearby. Once the songs have ended, the men who were entranced by the songs will be attacked all at once, and will probably end up being taken away.

When they spot a man that strikes their fancy, they create a "special song" specifically for that man that they will sing only for him. This "special song" will be infused with far more demonic energy than their ordinary songs, and upon hearing it the man will become powerfully attracted to them and be entranced. He will then seek them out, and have sex with them. Every time a man hears this "special song" his resistance to the song is further decreased. and the effect of the song will grow even more powerful. The more a man listens to the song, the greater the intensity of their sex.

When having sex with them, the gasping and moaning of their voice sounds almost like a song. This lewd song of course has the effect of causing powerful arousal in men. Men who listen to the song will then desire them more deeply and roughly, and then the song will also continue to build up and grow into something even more radical.

They sing a great deal normally, but when they come into heat they sing even more frequently.  There’s no doubt about it, because more and more ships disappear mid-voyage during these periods than at other times.  Sirens with husbands keep singing the “special song” to their husbands, so their husbands will always continue to lust for them.

Their songs are tremendously popular with monsters and monster couples not just because of their beauty, but also because of the effects. Many come and visit to hear them sing. They can make their singing voice resound through an entire venue with a song that arouses everyone. Monster couples can enjoy sex that's more intense than usual, and single human men and monsters are thrown into a lustful frenzy who will also be joined together openly, and they'll have sex right on the spot. Then the venue will become filled with a huge chorus of the moaning and gasping voices of many monsters.

At the retirement concert of an enormously popular siren, she had her husband thrust into her from behind while mixing in moans and gasps as she sang, causing the hundreds of couples gathered to all have sex. It was said to be the greatest concert in monster history. 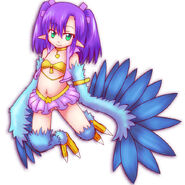 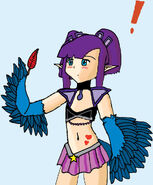 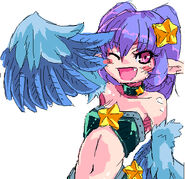 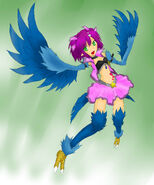 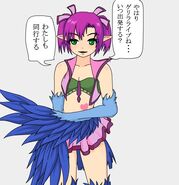 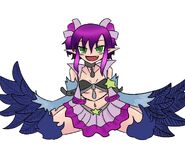 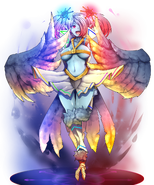 by NanoStar
Add a photo to this gallery

Retrieved from "https://monstergirlencyclopedia.fandom.com/wiki/Siren?oldid=1169308"
Community content is available under CC-BY-SA unless otherwise noted.