Bug type monsters covered in a sturdy exoskeleton that is like armour, impenetrable by both sword and arrows. They are heavy cavalry from birth, possessing organs of modified exoskeleton that are like weapons, shields, and horns, as well as a massive lower body. In combat, they appear as perfectly trained soldiers, never faltering or falling into disarray. They are taciturn, and poor at expressing emotion. On top of that, it is difficult to read emotion from their peculiar insect-like eyes.

The race's horns, weapons, and shields come in variety of forms. They are classified into different varieties such as “scissor beetles”, like the individual in the illustration, that have two horns, and a scissor-like weapon, “lancer beetles”, that have a single horn, and a spear like weapon, and “shield beetles”, that don't have horns, but do have a sturdy great shield.

They prefer sweet things, and they swagger through the forest with their heavy-looking body, lured by the sweet fragrance of their favorite treats: tree sap and the spirit energy of human men. Also there are wings inside the carapace on their back, and they can even fly, if it's a short distance.

When they find a human man after being lured by the scent of his spirit energy, they will attack for the sake of producing offspring. But before they copulate using their vagina, they will stick their face in the man's crotch towards the source of the sweet fragrance of spirit energy, and crawl their tongue along his penis in attempt to lick up semen. By doing this, they first learn the taste of the semen of the man who will be their partner before going straight to breeding. It is said that once they have recognized a man as their husband in this manner, they will always follow along and wait nearby, behaving as if they were a soldier escorting him. From the manner in which they fight, they appear inexpressive, without the slightest hint of emotion, so they tend to be mistaken as heartless warriors.

However, once they get married, it becomes apparent that they certainly have a heart despite their lack of expression. They really like the taste of semen when they drink it through their mouth, and they will often want to drink it. It is said that sometimes they will even suddenly move their face toward their husband's penis and beg for his semen, which is like the sweetest nectar to them, somehow there's a spark in their eyes that shows just how enthralled and delirious they are. And when they're not able to drink semen, they puff out their cheeks and display an expression of dissatisfaction, even if it's only slight.

When copulating with their husband, they seize him and hold him in place with the forelegs growing from the area near the border between their human body and their lower body. If he tries to get away, they'll shake with repugnance, and show a selfish side that would be impossible coming from an emotionless soldier. And when semen is poured inside their womb, the spark of female ecstasy can definitely be seen deep within their moist eyes.

When they find a feeding site or a human man, if they also bump into another individual of the same race, it is said that in that case the two soldiers will have a duel. It is a custom for deciding priority when it comes to food and men, and in effect raises the skill level of their race as a whole. But in the case of a duel fought over a man, the outcome doesn't determine who will claim the man, instead merely determining “the order in which they will copulate”. Ultimately, after copulating with one, a man will end up having to copulate with the other. For that reason, should a man try to escape while they are dueling, they'll cancel the duel on the spot and change their target to the man; swarming him like bugs going after oozing tree sap. 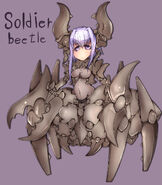 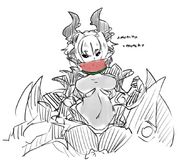 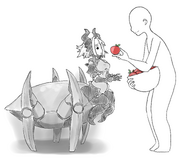 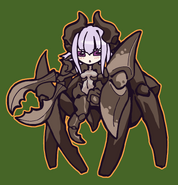 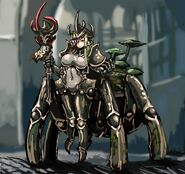 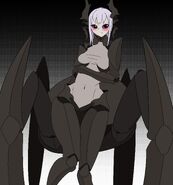 by bugseid
Add a photo to this gallery

Retrieved from "https://monstergirlencyclopedia.fandom.com/wiki/Soldier_Beetle?oldid=1209246"
Community content is available under CC-BY-SA unless otherwise noted.