A plant type monster endowed with a countless number of slippery tentacles. Originally they weren't monsters, instead they were grotesque plants known as "tentacle plants" that grow in clusters in the demon realm, but after building up demonic energy while continuing to enviously observe the sight of monsters having sex with human men, they became monsters. Before becoming monsters, they were tentacle plant leaders possessing high intelligence, so they can communicate with and manipulate the tentacle plants around them.

Because the natural ecology of tentacle plants involves pleasuring captured prey and sipping energy, they are intimately familiar with all the erogenous zones of the human body from birth. All sorts of bodily fluids, everything from tentacle slime to a woman's saliva and love juice, function as aphrodisiac fluids that heighten their prey's sexual feelings and cause sexual excitement. Despite being organisms that specialize in providing pleasure like this and milking spirit energy, they're warm, and they have a surprisingly amiable disposition towards people.

Perhaps because they were originally plants that mainly attacked women, and hardly ever touched men, the tentacle race itself is unaccustomed with men. When they spot a man that strikes their fancy, they hesitate to attack due to bashfulness and bewilderment, and many of them can't bring themselves to act. But even so, they will nervously extend their tentacles towards a man to obtain the partner that they have longed for. Perhaps because they are tentacles, even if they have no deliberate intention of doing so, tentacles touched will lewdly coil around a man's body and seize it, stimulate his erogenous zones, and make his expression contort with pleasure. The moment they see that expression, they tremble as arousal is born within them. Pleasuring their prey pleases them more than anything else, and the tentacle's instinctive desire to rape awakens to the degree that both their mind and consciousness grow syrupy and sloppy.

Upon awakening as a spirit energy-milking organism, they use their variously-shaped tentacles to coil around a man's entire body, crawling all over, licking, teasing, jerking and sucking, completely covering a man's body with an endless variety of pleasures.If their vagina-mouthed tentacles or female body engulf a penis, when semen is released, so much pleasure attacks the man that he becomes dazed. When they see a man go silly from the pleasure they themselves provide, their instinct as a tentacle makes them experience the greatest ecstasy and fulfillment.

However, if they acknowledge a man as their husband and their instinct as a monster female fully takes root, they won't be able to be satisfied from just that, and it causes a new desire to arise, a new instinct to immerse their beloved husband in pleasure and drown him in their affection. If that happens, sex with them won't just end with sipping a little bit of spirit energy. They will coil their tentacles around their husbands arms and legs so that the thing engulfed can't get away, and they will repeatedly caress and squeeze out semen using their tentacles and female body. Furthermore, perhaps because of their amiable personalities, even when not having sex, as if to seek affection, or as if a parasite, they seem to always wrap their tentacles around their husband and try to cling to him.

Since they are monsters, their love is absolutely directed toward men, but when they see a woman, they think something like "she could become more wonderful if she had a look of ecstasy on her face". And then they just crawl their tentacles all over the woman's body igniting the tentacle's instinct. By the time they realize it, they have made a monster go wild with passion, and made a new married couple. It seems going out of control after immersing a human woman in pleasure and changing her into a monster is something that is considered embarrassing according to their personality, and it's something that is presently of concern to them.

This time's monster girl is “tentacle”, a race of tentacle plants inhabiting the mamono realm that transformed into monsters.

It seems this sort of thing ends up happening because they feel jealous when watching married couples go at it in the tentacle forest.

Originally, they were the kind of tentacle plant called “tentacle brain” that is shown with a gnome placed on its head around the lower right of the cover of the book version, “Monster Girl Encyclopedia World Guide 2 Mamono Realm Nature Traveler's journal”.

They have warm and amiable personalities, but given that they were originally tentacles, it seems they're incredible girls if they get going.[1]

Originally just a mass of mindless tentacles, the demonic energy they built, increased their intelligence and allowed the mass to take the form of a woman.
Add a photo to this gallery

Tentacle Dragon by [Will] 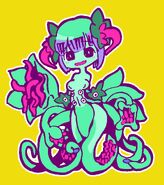 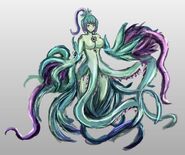 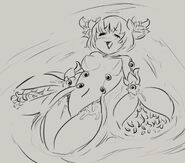 Retrieved from "https://monstergirlencyclopedia.fandom.com/wiki/Tentacle?oldid=1178560"
Community content is available under CC-BY-SA unless otherwise noted.