Demihumans that live in villages they make underground or in caves. They've got a large frame, and a durable body with high vitality. They have a high affinity with earth elementals, and the power of the earth is imbued in their body. Perhaps because of that, various plants grow from their heads, and have a symbiotic relationship with the trolls.

Due to the existence of the trolls' body as a soil, it's possible for the plants to grow, even in bad environments such as caves and wastelands, etc. On the other hand, due to various medicinal benefits brought about by the plants, trolls are blessed with the ability to rapidly regenerate even if wounded a bit, and they can even use them as emergency food and medicine.

Gentle and highly intelligent by nature, this race has had various intermingling and trade with humans, and sometimes there's even social cooperation, but that's the tale of indoors and nighttime activity. For when hit by sunlight, the power of the earth that dwells within them increases. Due to this, the "soil" of their body becomes an existence even closer to "the earth", activating the plants on their head, and the medicinal effects caused by the plants increase.

The plants of the demon realm with bewitching and aphrodisiac effects are included among those growing out of their head. Those compounds affect their mind, and go around their body, driving them wild with lust, causing their eyes and thoughts to melt with lewdness. In spite of the fact that they seem to be spaced out, as if sleepy after taking a sunbath, on the contrary, their physical abilities are increased. Driven by desire, they'll assault human men in an attempt to have sex with them. Because they have this sort of ecology, they are often reported to be a dim-witted, ferocious race by those who have encountered them under sunlight.

Their bodies are not just excellent soil for plants, they're also extremely well suited for men to sow their seed. Their voluptuous forms are pleasantly soft and huggable, and they can tightly squeeze and pleasure a man's penis when they take it in, causing the ejaculation of a large volume of seed. When semen is poured inside their womb, they don't waste a single drop, they let it permeate their body and greedily try to become pregnant with a man's offspring.

They have a custom of decorating their bodies with beautiful flowers, because of an inferiority complex they harbor. Their hands and feet are large and crude compared to those of humans, and they want to hide them to look at least a little bit better to men. Also, they have an extremely strong body odor, so another of the reasons is to cancel it out with the fragrance of flowers. However, the body odor is definitely not something unpleasant, if men nearby smell it, the powerful 'female' odor makes them dizzy. That alone is enough to cause an erection.

Furthermore, in the dawn of the future when monsters become able to give birth to incubi, it is expected that "having a high affinity with the earth elementals, they will give birth to the greatest earth elementalists," so the faction of elementalists that are friendly towards monsters have approached them, and have been actively deepening friendly ties as of the present. Among them, many men are falling for them, and getting married to them.

This time's monster girl is “troll-san”, familiar also in games. Speaking of trolls, in recent fantasy they've been depicted as a violent, dim-witted race, but originally, it seems they may have variously been depicted as monsters close to that, or something close to giants, or something like little fairies. The encyclopedia's troll-san is a sort of mix of all the various original depictions. In the original stories, they had a deep connection with earth and rocks in various senses, so somehow even in the encyclopedia world, they're born with the blessing of the earth elementals, and it seems the power of the earth dwells within them.[1] 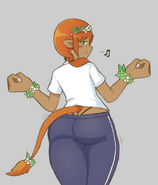 by koburatuisut
Add a photo to this gallery

Retrieved from "https://monstergirlencyclopedia.fandom.com/wiki/Troll?oldid=1210655"
Community content is available under CC-BY-SA unless otherwise noted.