Omnivorous, the essence of human men

Ice spirits that inhabit snowy mountains in the Zipangu region, who are gorgeous women with bluish-white skin that make a beautiful, but cold and sharp impression. They share the same origins as the "yuki-onna" race, who do look quite similar to them, but compared to the gentle-natured yuki-onna, they are far more succubus-like and have a ferocious disposition.The monstrous nature of this race is readily apparent. The "ice mana" contained within them even freezes their own heart, and they're always tormented by feelings of loneliness and desolation. Ergo, they long terribly for the heat that dwells within human men. When a man soon to be prey visits the snowy mountains, they'll try to aggressively launch an attack and violate him, seeking pleasure and debauchery enough to melt their very heart and body.

Just as the name tsurara-onna, "icicle woman", implies, they can convert the ice mana dwelling within them into icicles that they can control. Any prey that resists will have icicles rained down upon him. A man whose body has been pierced by these icicles will not sustain any external wounds, but ice mana will steadily spread throughout his body from the places where he was pierced, inducing feelings of loneliness and desolation so severe that it is hard to resist having his heart frozen. As his heart freezes over time, the man will grow so cold that he will be rendered incapable of thinking about anything, and before long he'll be rendered immobile while curled up and shivering.

The only thing that can thaw the heart once it's been frozen like this is the "warmth" that monsters direct towards men. Until being embraced and violated by them, there will be no warmth in the man's heart. If attacked by a monster in that condition, he'll end up surrendering himself, unable to resist the heat and pleasantness of the warmth of the monster intent on melting his heart and body.

Licking her chops over the frozen treat, the tsurara-onna will then bring him back to her dwelling, and then, when her body indulges in the man's essence and warmth, along with that, the woman will pour insanely lewd heat into the man, and the sex they enjoy will practically make them melt into each other.

They want to be in a state where their frozen body is constantly melted by their husband. Ergo, they're extremely greedy for their husband's "warmth". Whether day or night, they'll lie with him, continuously joining with their husband for as long as possible. Of course, they'll try to spend their life copulating in delirium, showering in his essence, and you can bet whenever there's an opening, they'll snuggle up to him and wrap their arms and legs around him, so as to fully enjoy even the warmth of human skin.

Also, in contrast with their violent disposition, they devotedly serve their husband in a manner befitting of a monster of Zipangu, and can even be meddlesome, but they say that pouring love into their husband in this non-physical manner is also one of the things that makes them feel comfortable and produces heart-melting warmth. It may appear to be lady-like behavior at a glance, but compared to the yuki-onna, who has the skill to cajole a man into desiring her himself and taking her as his wife, the tsurara-onna will push herself on a man and violate him whether he says yes or no, pleasuring his body, and she'll exhaustively serve him whether he wants her to or not, delighting his heart. That's how they roll. Even the way that they devotedly serve their husband according to their own desire is like a "ferocious monster" who loves her husband. 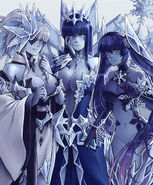 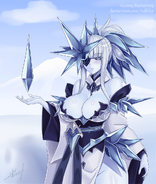 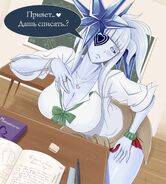 by cromwellb
Add a photo to this gallery

Retrieved from "https://monstergirlencyclopedia.fandom.com/wiki/Tsurara-onna?oldid=1186841"
Community content is available under CC-BY-SA unless otherwise noted.