Water elementals born from concentrated “water elements” that were corrupted by demonic energy and became “monsterized elementals.” They are monsters that have beautiful bodies that are translucent like the water they are made of, and have a pure, kind heart with a gentle disposition. Normally they dwell near sources of water like lakes and springs, and they seldom attack humans.

However, they are always seeking a human man to become their covenanter and share love with, and although they won't attack, if a man strikes their fancy, they'll actively seduce him into becoming their covenanter and having sex with them. Water elementals intrinsically have a strong yearning towards the love shared by men and women, and the demonic energy within them converts that yearning into powerful desire; to them and to monsters, that is love, and it drives them to have vigorous sex with human men.

They always snuggle up to their covenanter, adoring him like a lover. By having sex, they offer him the power of water, and through devoted service, they offer him pleasure. Their body, which is made of water, gently envelops the covenanter's penis, and one can experience a gentle pleasure that is unlike anything that can be experienced with another monster. Along with the strong pleasure, a man will attain serenity while being enveloped by them, as if their devoted and gentle heart had reached him. And then, when semen is released inside their translucent body, it'll float for a while, and they'll ecstatically delight in the fact that their beloved covenanter's semen is there inside their body.

When a covenanter charmed by them continually provides them with spirit energy, eventually they'll transform into a “dark elemental" which is dominated by demonic energy.

Just as water gets muddy, their once pure hearts become impure with pleasure and undergo a dramatic transformation, becoming lascivious and lustful. Sex with their covenanter also changes, becoming violent like a muddy stream; their covenanter's rational mind will be gulped down along with his spirit energy.

Being water elementals, when they are corrupted by the dark element, it's the same as the waters of the natural world being corrupted by the dark element. Their water jugs are originally full of pure, sacred water with no stagnation, but as they become completely clouded with demonic energy, so too does the water in the jug become murky, being blended with demonic energy. The water flows out into the waters of the natural world. As for humans who drink this water corrupted by demonic energy, if it is a man, then he transforms into an incubus, and if it is a woman, then she gradually transforms into a succubus. If the water is drunk by a monster, she is empowered, and able to have even wilder sex with men. In this way, not only the water, but the entire land becomes eroded by the dark element, gradually changing into a mamono realm.

Additionally, they have an extremely difficult time dealing with verbal abuse from their covenanter. If they hear even a little bit of this, they'll become afraid of being hated by their covenanter. Afterwards, they'll have wild, frenetic sex with him as though their ordinary gentle personality was a lie. They provide thorough service in order to make the covenanter love them again. They try to imprison a man's body and heart through sheer pleasure.

No longer entirely pure, they seek to be covered in their husband's own water. 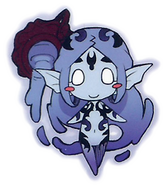 Great Songstress Difina from World Guide Side III
Add a photo to this gallery
... 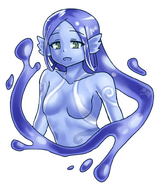 By いなほみどり (Whether)
Add a photo to this gallery

Retrieved from "https://monstergirlencyclopedia.fandom.com/wiki/Undine?oldid=1177093"
Community content is available under CC-BY-SA unless otherwise noted.