Unicorns are centaur-family monster girls remarkable for their distinctly good-natured behavior. Gentle monster girls that reject the screw-everything-that-moves nymphomaniacal attitude of the succubi and most other monsters, they guard their own chastity and prize it in others too, giving them a particular fondness for virginal husbands. While they will wait for marriage, the release of their pent-up lust on their wedding night is remarked as "ferocious".

Still, unicorns are monsters, and a monster's desires often overwhelm their better judgement. Erratic sex with a man who has another monster's energy on him causes a dramatic physical and mental transformation in a unicorn, turning her into a bicorn. A husband needs to remain faithful in order to keep his unicorn wife from transforming.

A type of centaur that lives deep in forests, distinguished by its beautiful white coat and a single horn coming out of its forehead. Even though it’s a monster, it is regarded as a “symbol of purity.” Its graceful personality and gentle behavior are those of a chaste maiden.

Because they possess this sort of nature, they tend to be misunderstood, but just like other centaurs they are extremely lustful. Unicorns without husbands spend their time dreaming of days of sweet pleasure with their husband-to-be. When they swear their oath to their husband, in order to make everything they have dreamed of a reality, they'll use their lewd body they have been saving just for their husband to thoroughly service him. Afterward, they'll frequently seduce their husband and spend sweet days of pleasure continuously having sex just as they dreamed.

There is powerful demonic energy contained in a unicorn’s horn and because of it, they can use powerful healing spells. This healing power grows more potent the purer their “unicorn energy” is. Conversely, if other magical energy gets mixed in, it loses power. It is said that this is the reason why they avoid men who have had intercourse with other monsters, in order to prevent the magical energy of another monster from mixing in with their unicorn energy.

When that happens, a unicorn's energy becomes radically distorted and she will transform into a monster called a "bicorn", which, in contrast to the unicorn, is referred to as "the symbol of impurity". They regard indecency as virtue and desire to live an obscene life even more immersed in pleasure together with their husband. Because of this, they'll even call the person their husband was cheating with, and then, in order to obtain even deeper, more intense pleasure, they'll have threesomes together.

They are the symbol of purity, but in a manner befitting of their true nature as a lustful centaur family monster; their first kiss will involve the insertion of the tongue and the exchange of saliva, and later their kisses will become even deeper and wetter.
Add a photo to this gallery 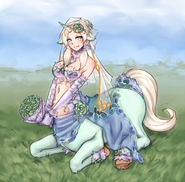 Art by monorus of Pixiv

Unicorn by Butter-T
Translation: ‘Meeting you here must mean you are my destined man. Please take care of me.’

Unicorn from Azur Lane as a...unicorn 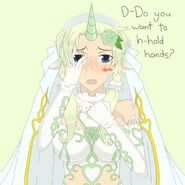 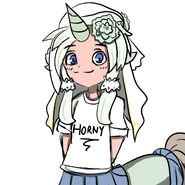 by Heiredeb
Add a photo to this gallery

Retrieved from "https://monstergirlencyclopedia.fandom.com/wiki/Unicorn?oldid=1208270"
Community content is available under CC-BY-SA unless otherwise noted.