Warriors of heaven that serve the gods, and mid-ranked angels that are both valorous and noble of spirit. They swear loyalty to the gods who are their masters, and obeying “the voice of the gods” that echoes directly in their mind, they accompany humans destined to become heroes and champions. It is their duty to urge these individuals to awaken as heroes and build up their power. Those who have been encountered by them go on to become great heroes widely known to the world, and it is purported that after death their souls are lead before the gods.

They're not monsters to begin with, but individuals corrupted by demonic energy are treated as monsters. Even in that case, they don't completely become monsters right away because of the divine protection they innately possess. Many individuals don't even realize that they're in the process of being demonically corrupted, remaining loyal to the gods and noble of spirit. Unwavering, they will seek to fulfill the duties given to them by the gods. However, once their power is bound with demonic energy, if they raise a man as a hero, it not only builds up his abilities, but also heightens his sexual desire. Just as it is said, “great men have great fondness for sensual pleasures”, and as men become imposing heroes, so too does their desire swell and overflow, eventually being directed at the valkyrie. Being virtuous battle maidens, they are originally extremely abstemious with regards to sex and pleasure, but then the strangest thing happens.

The “voice of the gods” echoes in their mind, commanding them to “receive it.” The “voice of the gods” which once strictly gave them divine commandments then starts giving them orders like “do lewd acts to give the man pleasure”, and sometimes, “act sweetly like a lover.” Even though they are conflicted and bewildered by this, they are unable to disobey the gods' voice. Lead by the voice, believing “it's a divine commandment”, and “it's for the sake of making him into a great hero”, they will end up having sex with the man and receiving pleasure and desire with their own body. Also, along with the valkyrie, heroes raised by demonically corrupted power become more honest about their own “desires.” Regardless of their position as servants of god, loyalty to god and the church, and the presumption that god is justice and monsters are evil, they start to act according to their own personal sense of justice and noble spirit. They end up becoming “heroes” that aid the weak, whether human or monster, and crush evil.

While spending time having sex with a man in this manner, their true nature as a battle maiden affects the man's heroic form. The monster's instinct causes them to become attracted to the sight of the man who seeks them as a woman and directs his desire towards them. Eventually, they no longer think anything of the gods' voice commanding them to do monster-like deeds, and the fact that they're having sex with a man. Along with this, the frequency with which they can hear the gods' voice also declines, but in turn, they start to voluntarily have sex with the man, and enjoy pleasure and spirit energy. By the time “due to divine commandments” is replaced by “for his sake”, as a “valkyrie”, they have already completely become a monster. Furthermore, actually, their communication with the gods was cut off from the moment they became demonically corrupted. What they thought was the “voice of the gods” was actually “the voice of their own desire” all along. The moment they completely turn into a monster, they become unable to hear this voice, but if they realize it before then, then they fall as a black battle maiden, a “dark valkyrie”. 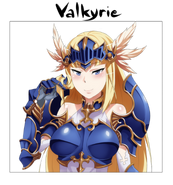 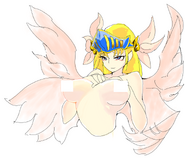 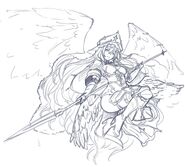 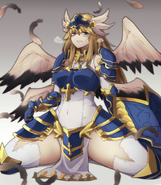 by Yonaga
Add a photo to this gallery 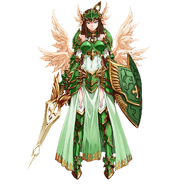 Retrieved from "https://monstergirlencyclopedia.fandom.com/wiki/Valkyrie?oldid=1185335"
Community content is available under CC-BY-SA unless otherwise noted.