A bug type monster known as the "vampire of the insect world" because they bite humans and suck their blood. They have meticulously cunning personalities, and soon as they spot a human man who will serve as prey, they will fly around the area for a while and wait for the perfect moment to bring down their prey before attacking.

Their wings make a distinctive buzzing noise during flight that disturbs the hearts of those that hear it, and alerts them to the monster's presence. At the same time, the person will lose concentration and get distracted. For that reason a man being targeted will already be seized in their embrace by the time he comes back to his senses, and he'll end up having his blood sucked.

Their ordinary staple food is flower nectar. Although they prefer men's blood, they don't suck it indiscriminately. They mainly suck blood during sexual intercourse with a man. Not only is blood used as nourishment for the sake of egg-laying, by obtaining the information from blood and mana contained in blood fluid in advance, they're able to adjust their own womb to more easily receive that blood and mana based on that information. In other words, they perform the act of blood-sucking to make it easier to bear the offspring of the man who will become their husband from then on, and adjust themselves to serve as excellent mothers suitable for raising children that inherit their father's blood. In short, sucking blood is like making a kind of marking for them.They're not just after the blood, they're after the man himself in order to form a couple.

Also, during blood-sucking they inject the man with venomous saliva. Due to the venom, the place blood was sucked from will become hot and itchy and throb, seeking pleasure. No matter what the man himself does, he won't be able to obtain pleasure, and the throbbing will not subside.

The bite mark will become like an erogenous zone, one that only reacts to the one who sucked the blood. The throbbing can only be soothed if they touch it, crawl their tongue along it, suck blood once again, and the pleasure induced is like having the penis teased. In this way, once a man has had his blood sucked, even if he tries to run away, he'll be agonized by the bite mark which throb in yearning for the vamp mosquito. They would never let such a man escape. Instead, they would fly around the area and wait for the perfect opportunity to sexually violate the man.

They also perform blood-sucking during sexual intercourse, increasing the number of bite mark that serve as both erogenous zones, and proof that a man is theirs, thus increasing the throbbing and pleasure in their husband's body. Additionally, every time they suck his blood, their womb will yearn for their husband semen, and they will then suck on the penis with it and sip semen.

Furthermore, concerning their alias "vampire of the insect world", it seems the original vampires (kyuuketsuki), vampires (vanpaia), feel upset about it. Some vampires (vanpaia) have stated the following, "if they're going to bear the name vampire (kyuuketsuki), they should have pride as monsters, and not easily bear human offspring." However, it seems it was humans that started calling them that name in the first place. Of course, the vamp mosquitos themselves are busy copulating to become pregnant with their husband's offspring, so they appear to be completely disinterested in this subject.

TL Note: "Kyuuketsuki" is the Japanese word for vampire, but "vanpaia" is katakana English used as the name of the monster girl species.

This time's update is 「vamp mosquito」. It'll be off season pretty soon, but it's a mosquito monster girl. Just as they bear the name “vampire”, they're a race that sucks human blood, but it seems there is some reason for that. These bugs are irritating during the summer, but please don't hate them![1]

Question: I always hate those bugs, how could you make them so cute..... Is it like the blood they suck is stored inside the insectoid stomach?

KC's reply: That's right~ They store blood around the stomach and *breasts. (It's mixed with mana and stored). Of course, they don't suck that much all at once. It's the result of storing it up.

* TL Note: Confirmed to refer to the red organ between the breasts, not the breasts themselves.

Comment/questions: Regarding her appearance, egg laying and reproductive abilities.

KC's reply: Their arms and legs are insectoid, but the torso is that of a perverted girl! The image is like naked with long gloves and knee socks, so.. lol. They mostly lay many at once. It's more easy for them to get pregnant than other monsters to begin with, but of course they don't lay as many as real mosquitos~

Question: Asking about what diseases they carry and what happens if they bite human women.

KC's reply: It does seem like they would carry various diseases, doesn't it...! Ecologically, they suck blood solely from men, but if a woman were bitten, she would be monsterized + contract a mamono realm disease, or something...

Machine translation of updated information from KC's site: In other words, it is not to become itchy, even if bitten by a mosquito Vamp, Part of "Do not be heat with a subside - as itching," is that the erection to not become comfortably even treat yourself to have such a feeling. [1]

Comment/questions: Regarding her appearance, egg laying and reproductive abilities.

Question: Asking about what diseases they carry and what happens if they bite human women. 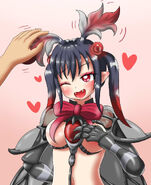 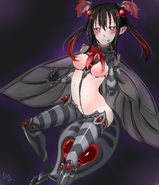 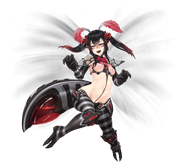 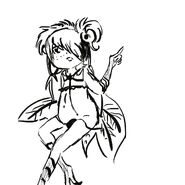 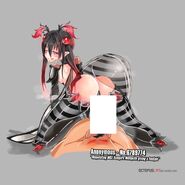 Retrieved from "https://monstergirlencyclopedia.fandom.com/wiki/Vamp_Mosquito?oldid=1163028"
Community content is available under CC-BY-SA unless otherwise noted.