Vampires are haughty, nocturnal monstergirls with a taste for human blood. Unusually for monsters, they generally restrict themselves to mating only with incubi. This is partially because a vampire who mates with a normal human may end up giving birth to a Dhampir. Vampires have a minor disagreement with vamp mosquitos over their presumption to the 'vampire' name, as these girls consider those buzzing insects entirely too gauche to be worthy of the term.

A higher rank race of monsters, boasting high magical power and a surprising amount of superhuman strength, which inhabit places such as mamono realms. They reveal themselves only at night and use the cover of darkness to attack their prey. They are extremely prideful, considering themselves to be “nobility" while strongly looking down upon humans as lesser beings.

Like other succubus family monsters, they feed on the spirit energy of human men, but they don't obtain it through sex like a succubus would, instead biting a man's neck with their fangs and obtaining it in that manner. Perhaps because when they suck blood they infuse the man with a slight amount of demonic energy, the men don't feel pain from the act of them feeding. Instead, both the one doing the sucking and the one being sucked can obtain pleasure enough to melt each other’s brains.

So for the vampires themselves, not only is a man's blood a sweet treat, at the same time it also makes them unbearably aroused just like an aphrodisiac. Due to the pleasure of the act of sucking and the blood itself, most of them feel a large amount of lust towards their prey directly after feeding, but as far as they are concerned, copulation with a human being is a filthy act, so most vampires are likely to try to control their lust.

Men they are fond of are taken away to their homes, and kept as both servants and food sources, being forced to take care of the vampire herself. Although they look down on humans; due to the influence of the Demon Lord's demonic energy, when they are looked after by the man they brought home, a powerful feeling of love wells up, and when they look at that man their body will throb badly. Since they are monsters, they won't be able to resist the urge, and eventually they'll come to desire the man both physically and emotionally.

A man who lives as their servant is infused with demonic energy every time the vampire feeds, eventually being transformed into an “incubus." Men who have become incubi will then be treated by the vampires as “nobles" the same as themselves.

Due to this, since men cease to be the “humans” that they look down on, depending on the individual, they may totally change their attitude. There are even those who start to treat their men almost like lovers, as if all the feelings for the man they had been suppressing until then had been forced to the surface. It is said that they also become unable to suppress their lust during bloodsucking, and will then have sex with the man according to their desire.

When the mamono lord took over, their nature changed into that of a kind of succubus, so they can also obtain spirit energy through sex. Once they start having sex with a man, the more they had been repressed, the more they will be enthralled by the strong pleasure that satisfies their devilish nature, and the sweet taste of semen, which will be on par with or perhaps even exceed the sweetness of blood.

Additionally, they also will rarely attack human females. This isn’t for the sake of feeding, but for the sake of changing a woman determined to have a “noble nature" into one of their own kind. Women who have had their blood sucked are infused with a vast amount of demonic energy, and are transformed into “vampires” themselves.

They possess extremely high fighting abilities, but they also have a ton of weaknesses. Under the sun's rays, their physical abilities are weakened to the degree of an ordinary human girl, and just from touching fresh water, a powerful numbing pleasure will course through their body. Additionally, they are weak to garlic, and just smelling it will diminish their reasoning abilities, and render them unable to think straight. Were one to put it in their mouth, their rationality would completely disappear, and they'd end up going wild and seeking pleasure just like the original variety of succubus.

Is vampire's cape her succubus wings?

Yes, they can be appeared or vanished at will. However, they are different in nature, and Vampire normally vanishes the wing unlike succubus. The wings in illustration of the profile is shaped like mantle, but they can be also shaped like bat wings.

Even the mighty vampire falls to the effects of demonic produce.

This is the result if afflicted with alraune pollen allergy. Even the body of a bundle of pride like the vampire gets all sticky, and begins preparing for sex with the man before her eyes.
Add a photo to this gallery 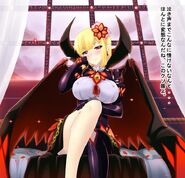 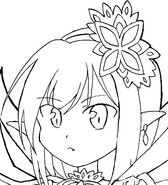 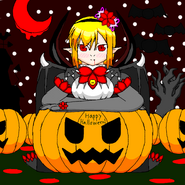 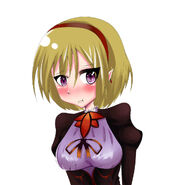 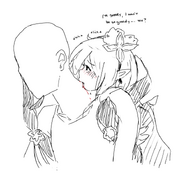 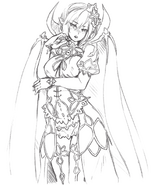 by HorrorPunkOtaku
Add a photo to this gallery

Retrieved from "https://monstergirlencyclopedia.fandom.com/wiki/Vampire?oldid=1182808"
Community content is available under CC-BY-SA unless otherwise noted.