A race of beastmen with a strange mode of life that live in villages hidden by blizzards. The appearance of married and unmarried individuals differs greatly. Unmarried individuals appear like a young girl clad in an overcoat that completely covers and conceals her entire body, and one cannot tell what is inside.

They follow around travelers roaming in snowy mountains and trail them from behind during blizzards. They excel in the art of self-concealment. They allow travelers to just sense their presence, but then, when the person hurriedly turns around to have a look, they will not be able to see them at all. After a while, they will call out to the traveler in a faint voice. This behaviour leaves travelers with an eerie impression, but they themselves are actually an extremely warm and gentle race. When they come across people in distress, they start following from behind out of concern.

However, because of their shy and reserved personalities, they do not like to reveal themselves in front of people very much, so they try to guide people to the exit of the mountain with just their voice and a hint of their presence. If one senses their presence and listens to their words, one will always be able to find their way out of the mountains. On the other hand, there are many who get so creeped out that they cannot even tell that they are being guided and end up collapsing. In such cases, they are carried into safe places such as caves where they can take shelter from the blizzard and the wendigos will warmly look after them.

In such circumstances, travelers will be able to see what they look like for the first time. Even though the girl will be entirely covered in the overcoat, the traveler can still discern the curves of her body, and will hear her lovely, caring voice. If the traveler is male, naturally, he will anticipate and desire to reveal what is deep inside the overcoat, but if he does peek inside, he will no longer be able to safely return to the human world.

Some men lose their minds the moment they behold her face and body. They will howl like a beast while mounting the wendigo, shove their steaming hot swollen penis inside, and begin to violate her; or so it is said. Then it seems these men carry the limp, senseless bodies of their lovers back to the wendigo villages deep in the mountains and disappear.

Additionally, a wendigo can only hide her appearance in the mountains during blizzards. Once a traveler has safely left the mountains, if they turn around they will be able to confirm what the wendigo looks like. At that point, after having a look at the face of their benefactor, no small number of men will decide to return to the snowy mountains again.

It is said that after a while an unusual phenomenon will happen even to those that managed to safely leave the snowy mountain. They will experience anxiety and a feeling of depression like something is lacking, while at the same time their lust swells remarkably. Eventually they will begin to hear the voice of the girl calling out to them, a strange amount of heat will gather in their nether regions and they will become able to be active even in the middle of a blizzard without any issues. Then the man will follow her voice into the mountains to claim the girl, whose white skin he briefly glimpsed through an opening in her overcoat, as his own.

Married individuals appear clad in an overcoat that is way bigger than their body as in the illustration. It is unnaturally dark to the point that you cannot see inside, yet instead of hiding, the girls make their figure stand out as if showing off. In start contrast to unmarried individuals, if sighted during a blizzard, they are often mistakenly seen as terrifying abominable snowmen, but they do not directly harm people.

If one focuses their gaze to the utmost limit and peers deep within the darkness, one will vaguely be able to make out a figure. However, if one is able to recognize the true form of the one who lurks in the darkness and what he is doing with the young girl, the spectacle will be burned into one's mind, and they will be unable to maintain their sanity; or so it is said.

This time's update is “wendigo.” These monsters have a peculiar appearance, but it seems the appearance of individuals differs greatly depending on whether or not they are married, and it seems the picture is of a married individual. They say that when travelers roam about the mountains, they suddenly get the feeling that they're being followed by somebody and start to hear a voice. Even if they turn their head and look, it appears there is no one there, but in actuality a wendigo is present... Like last time's mindflayer, they also have a peculiar mode of life, and it seems much about these monster girls remains a mystery, including their origins. As always, for details, please check the erotic monster girl profile. To make it easier to read, from now on, I'll be changing the large version of the text into a data format.[1]

Her entire body is completely hidden by the hood, and including the hood, about the normal size of a young girl. As for her face, the skin around the eyes is sort of covered by a pure black shadow, so you can't see it. There are two holes in the hood with the sort of feeling that just the horns are sticking out. It would be too plain to make a picture of, so I ended up doing the married one![1]

TL Note: "Much like the mindflayer the darker aspects of this profile (just what really happens to the man and why) appear to left unanswered to give a sense of mystery. Chances are if she is anything like the mindflayer then the truth is considerably lighter (i.e. the man's transformation is probably reversible and such)." - Perentie @ MGR 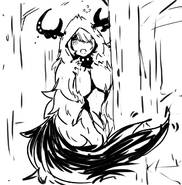 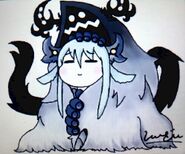 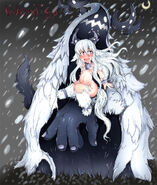 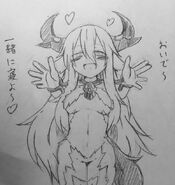 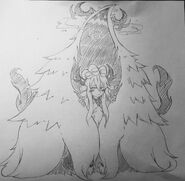 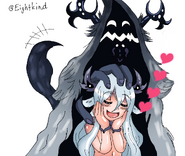 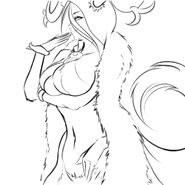 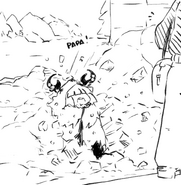 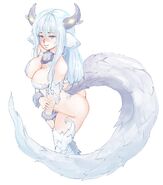 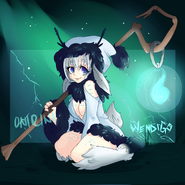 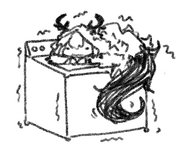 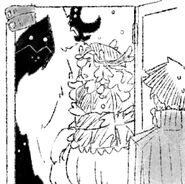 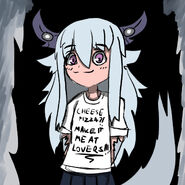 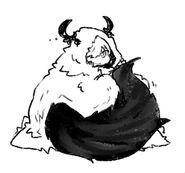 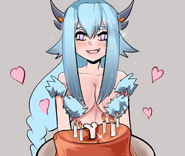 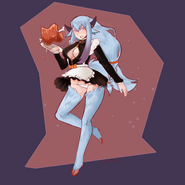 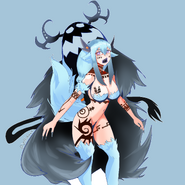 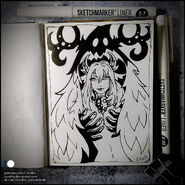 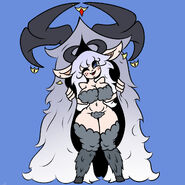 by Karnoss38
Add a photo to this gallery

Retrieved from "https://monstergirlencyclopedia.fandom.com/wiki/Wendigo?oldid=1209913"
Community content is available under CC-BY-SA unless otherwise noted.