Werebats are winged monster girls which prefer caves and darkness. In low light they are sadistic and assertive, and a pitch-black gang-rape by a werebat swarm is a fate which awaits those who wander into their lairs. In sunlight, their attitude switches entirely, and they become the frightened ones: their quivering, defenseless attitude often proving irresistible for getting men to rape them.

Beastmen with bat-like features that live in caves and other dark places. They hang upside down from the ceiling, in places with limited visibility and patiently wait for travelers to pass by. When one spots a human man who strikes her fancy, a Werebat will dive from out of the darkness, knock him down and forcibly mount him. Sadistic by nature, a Werebat will respond to resistance or pleading by escalating the violence of the rape, while grinning lasciviously and maliciously.

When multiple individuals are occupying the same space, their loud moaning and gasping will highly arouse the others, causing all of them to swarm the man. As if in a mad scramble for a single treat, they swoop down from the ceiling in a rush, to taste the man's body; licking, rubbing and teasing. Once a man ejaculates inside one of them, in the next moment a new one will mount him and begin rocking her hips. Since the frenzied orgy takes place in total darkness, the man will not be able to confirm how many of them there are, nor will he be able to tell which Werebat is violating him. It likely feels to him as though the pleasure is continuing forever. In this way, Werebats are highly ferocious, but they are vulnerable to light. If brought into a brightly lit area, they turn cowardly and are effectively helpless. However, even if brought to a brightly lit area, they do not flee from human men. Instead a Werebat would be afraid of everything other than the man. Seeking a man's aid, a Werebat will cling to his body and try to hide in his shadow. At this time, a Werebat will appear to be a nervous wreck.

Unlike when they violate men in the darkness, they do not give off a lewd or sadistic impression; on the contrary, a man may be tempted to do something sadistic to them instead. As if to urge it on, a Werebat will nestle close and push every part of her trembling female body against the man.

Their instincts tell them to seek sex with men, even in these circumstances. If a Werebat has sex with a man at such a time, then not only will she no longer be afraid, she will even be able to feel as relaxed as she would be in the dark, due to the pleasure and warmth provided by the man.

In the dark she would rape a man cowgirl position, but in a bright place she quivers and becomes submissive.
Add a photo to this gallery 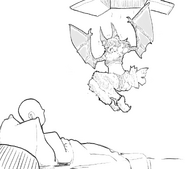 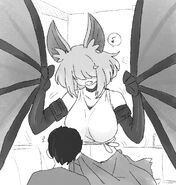 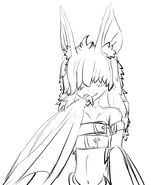 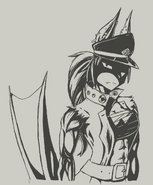 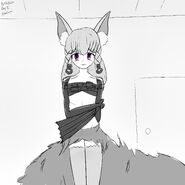 Retrieved from "https://monstergirlencyclopedia.fandom.com/wiki/Werebat?oldid=1182425"
Community content is available under CC-BY-SA unless otherwise noted.