A beastman type monster with the characteristics of a cat. They have a flexible and strong body, and are talented when it comes to springing on an unsuspecting victim. Aside from living in forests, some individuals also live around human villages, awaiting the opportunity to attack human men.

They have extremely capricious personalities. Often times, when you think they're taking a friendly attitude, they'll suddenly assume a sulky attitude. However, they are a creature whose body speaks louder than their mouth. If the tail is straight up, and the eyes downcast and avoiding contact with yours during a conversation, it means the werecat wishes to be loved, even though her mouth might say otherwise.

Even when they're in a sulky sort of mood, they'll soon brighten up if one has sex with them. Despite being capricious, having sex with the man they like is the one thing they still love to do no matter what the time.

They're usually not very dangerous monsters, but when they go into heat, which happens periodically, they become extremely ferocious, and when they spot a human man, they'll attack and violate him. They often then become attached to the person they had sex with, and even after their heat is over, they'll frequently seek that man. In the case that they've become attached, the longer they interact with a man, and the longer they have sex, the longer their heat will last. Even after it's over, the period before their next heat will steadily grow shorter. For that reason, if one spoils them too much, and has sex with them whenever tempted, they'll end up in a state of constantly being in heat, and things will get out of hand.

Should they catch a whiff of the fruit of a plant called “matatabi”, they'll fall into a state of intoxication, their sense of reason will be diminished, and for a while, they'll enter a state that's even more ferocious than when they're in heat. Even though they're usually capricious, during this period, their head will become full of only thoughts of fawning on a man and having sex, and, in a state of maximum arousal, they'll rub their hot body against a man, seeking intercourse.

Regardless of her behavior, she's always interested in mating, and has a habit of playing with his dick as if it were a cat toy. 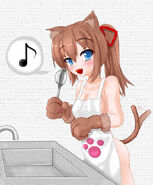 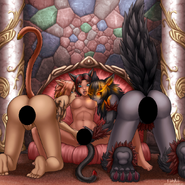 Tama from Kancolle as werecat by [paundo]