Half human, half beast monsters having the characteristics of rabbits, the majority of which inhabit meadows. They are docile compared to other werebeasts, and are friendly toward humans. They tend to be cheerful and extremely curious. Perhaps for that reason, they are restless, and spend much of their time running and jumping to and fro.

Although I have noted that they are relatively docile and friendly to humans, that doesn’t at all mean they aren’t dangerous. Unlike most werebeasts, they have no fixed fertile time; rather their mating season is year-long. A wererabbit will greet any man she encounters; if the traveller returns the greeting in a friendly manner, she may take a liking to him, at which point the impatient wererabbit will push him to the ground and take him on the spot. Contrary to their personality and appearance, sex with them is extremely furious. Even when on top of a man they shake their hips like a rabbit hopping around, and indulge in the pleasure. If one were to attempt to escape from a wererabbit in heat, it would be difficult since they swiftly hop around the plains with their powerful legs.

Although the veracity of this is uncertain, it is said that they hate being alone so much that they can even die from loneliness. They desire to always be close to the man they've taken a liking to, and they'll move their body intimately close and fawn on him, seeking sex, which allows them to be as close as possible to him. For them, the happiest time is definitely when they‘re joined with a man, becoming one.

This is purely a rumor, but if you follow a wererabbit without being noticed when she is hopping around aimlessly, it is said that sometimes you will arrive at a place called “Wonderland” along with her. That place is said to be a bizarre dimension where the monsters are constantly in heat like wererabbits and want to have sex with men like crazy. However, as of the present, no one has ever returned from that place, so it's uncertain whether it really exists. Also, should someone try to follow a wererabbit, in most cases, he would be noticed since their big ears have excellent hearing, and she would head straight towards him and attack.

Although they can be incredibly cheerful, they become lonely very quickly, they often will lick and suck on carrots to imitate the behavior they wish to act out with a man.
Add a photo to this gallery 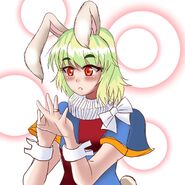 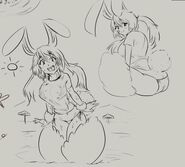 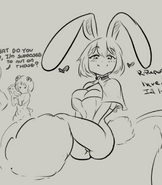 by OmaOti
Add a photo to this gallery

Retrieved from "https://monstergirlencyclopedia.fandom.com/wiki/Wererabbit?oldid=1168543"
Community content is available under CC-BY-SA unless otherwise noted.