Herbivorous: fruit juice, the smoke of tobacco made from mushrooms, etc.

Wonderworms are a race of Monster Girls native to Wonderland and a subspecies of the Greenworm. Supposedly originating from a single, voracious Greenworm who angered the Queen of Hearts by eating all of the childish Lilim's treasured sweets, said Greenworm was cursed to have a highly reduced appetite. Because of this, the Greenworm could no longer pupate into a Papillon, and instead grew mature while still remaining a caterpillar.
Looking far more mature and voluptuous than the childlike Greenworm, Wonderworms are much more laid-back than their progenitors, and can often be seen slacking while smoking tobacco made from Wonderland produce. While they don't usually initiate assaults on Human men, the tobacco smoke Wonderworms exhale has a very intoxicating effect on men, making them lose their inhibitions and be more open to sex and the madness of Wonderland. Should the man invite or agree to an invitation for sex, they'll prove they are just as sexually voracious as a greenworm is nigh endlessly hungry and will actively keep the man from getting loose from the passionate embrace of their long, squishy, body until they're satisfied.

A race unique to "Wonderland" having the soft, squishy body of a caterpillar. The progenitor of this race was a lone "Greenworm" who wandered into Wonderland and incurred the wrath of the "Queen of Hearts" by devouring all the sweets that were meant for a tea party she had been looking forward to. It all started with her being struck by a spell meant to curb her appetite, which resulted in the loss of the ability to go through the pupal stage and change into a "Papillon", which is a butterfly. Thus, they became a race whose body grows while still in caterpillar form. And so, unlike the original race, it is no longer necessary to eat large amounts to become an imago, enabling them to be active for long periods of time even with extremely scarce meals such as small amounts of fruit juice, etc.

Since the nutrients and mana which originally would have been stored up for the transformation into an imago instead are all used to fuel the body's growth, regardless of them eating very little, they tend to grow much larger compared to the original race and easily end up with a voluptuous figure. Perhaps because of having to maintain such a large body with little nutrients and mana, they aren't very active, and their words and actions seem more laid-back than the original race, giving them a languid aura.

When conversing, each time their mouth opens, breath spills out, and men will start to feel a dizzying intoxication as they listen to their seemingly mystifying words. The sight of them languidly sighing will be unbearably alluring, and just being blown on from up close will be enough to cause entrancement in a dream-like mind state. With diminished reason, one is powerless to resist the sexual desire that is laid bare. Common sense that has been shaken and shattered will reform in a manner suitable for a denizen of Wonderland. Just like the monster before his eyes, so too will the man feel that it is proper for two people who want each other to sate their sexual desires together, and they will end up lying together without it being clear who initiated it.

Since they are already adults, they have little "appetite", but given it's an adult body specialized for reproduction, it's as if the greenworm's endless appetite is replaced with an equivalently insatiable lust. Although they seldom attack human men themselves, once a man is mystified by their smoke, if invited for sex, they'll seize their husband with their long elastic body and its countless legs to keep him from escaping the pleasure and intoxication. 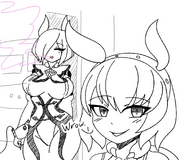 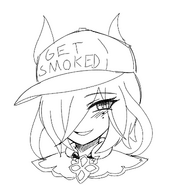 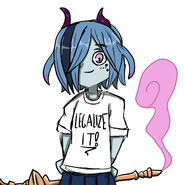 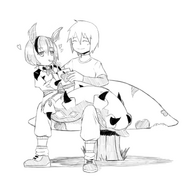 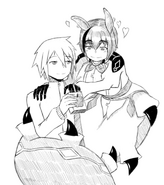 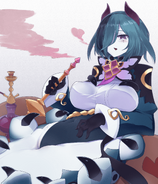 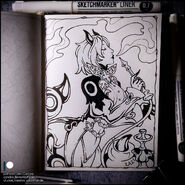 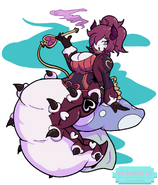 by StarBoy8
Add a photo to this gallery

Retrieved from "https://monstergirlencyclopedia.fandom.com/wiki/Wonderworm?oldid=1210582"
Community content is available under CC-BY-SA unless otherwise noted.