A type of Dragon that has the upper body of a woman, and a long, snake-like lower body. Because of the powerful, magnificent way they advance by crawling on the ground, they are also called “earth dragons.” Even though they are a lesser race of “dragon”, in terms of raw power, they’re no better or worse than dragons. Their body is sturdy enough to crush boulders by ramming, they’re covered in hard scales, and they have endless stamina. However, their intelligence is extremely low, their thoughts are simple, and basically all they think about is mating with human males. Their personalities are ferocious, and since they aggressively assault human men when seeking a reproductive partner, they are feared as monsters even more dangerous than dragons.

Wurms are especially dangerous once they’re in a state of arousal after detecting a human male. If there’s a boulder in front of them, they’ll smash it and continue onward. If a man hides in a forest, they’ll mow down all the trees and beeline straight to his position. Once they’ve spotted their prey, every obstacle is meaningless to them, and they’ll never stop until they get their man. It’s difficult to run, but even more difficult to fight and drive them away, so it’s even said that the easiest way to stop a wurm is to give her a man. Actually, so long as they’re able to catch a man, the inside of their head becomes colored with thoughts of nothing but sex with the husband they just obtained. They will either bind the man with their long body and begin sex right then and there, or bring him back to their lair to take their time.

Their bodies are covered in hard scales, but the scales can recede, exposing soft, sensitive skin so that the abdomen, and especially the front part of their upper body are very sensitive to receive pleasure from the heat and touch of a man’s body. To them, their snake belly and bare skin are their weak points during mating. In fact, they very much enjoy feeling a man with these weak points, and like a Lamia family monster, they normally coil around the man and try to glue their bodies together as closely as possible. When they assault a man, they are extremely ferocious, and the sex is also violent, but once they’ve settled down with a husband, they think of their husband as “a male for impregnating themselves” and they think of themselves as “a female for bearing that male’s offspring.” For that reason, it’s surprisingly easy to tame them as long as one can take the lead during sex, exploit their weak points, and exhibit his power as a male. Though they possess the overwhelming power of the dragon family, because of their simple and meek personalities they can become very affectionate and obedient.

Additionally, like the original dragon, it’s possible for them to change into the form of an enormous dragon from before the Demon Lord seized power. However, since that is inconvenient for having sex with men, and all they think about is sex, they don’t assume that form if given a choice. 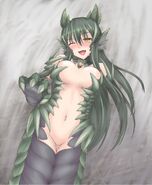 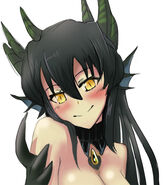 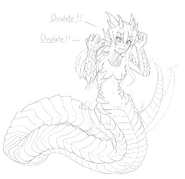 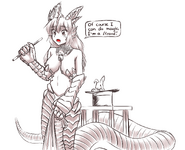 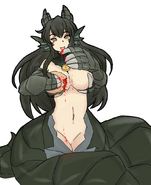 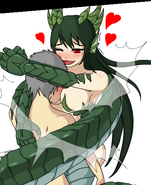 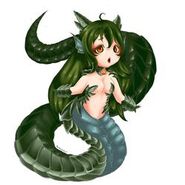 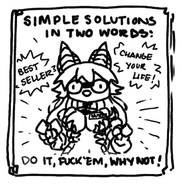 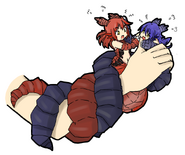 Red Wurm in glasses by Sookmo 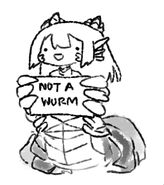 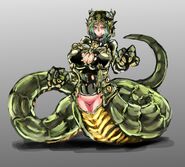 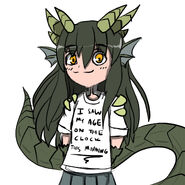 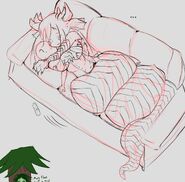 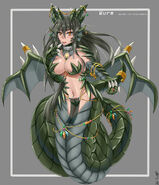 by Ryuu no Namida
Add a photo to this gallery