Zipangu, also known as the Kingdom of Fire and Kingdom of the Sun, is a region in the Monster Girl Encyclopedia world with a distinctly Japanese flavour [1]. Described as an "extremely small island country" [2] far away in the east of the world, Zipangu is home to many comparatively peaceful monster girls who coexist with humans in mixed settlements. While aggressive factions still exist, both on the human and monster sides, the region in general is a lot less rape-frenzied than the Order's continent.

Although the monsters (or "yokai") of Zipangu respect the Demon Lord, they look to their own affairs and do not contribute to the Demon Army. Nevertheless, the passive effects of having many monsters in one place for prolonged periods of time means that parts of the region constitute bright green demon realm [3].

The humans of Zipangu do not worship the Chief God, instead mostly believing "that the divine is present in all things". There are even instances where some mamono are worshiped as gods, by both human and mamono worshippers. The Ryu and Inari are common targets for such faiths.

Even on occasions where the human man is pursued by a mamono that's seeking a husband, most of these instances turn out to be much less violent.  In fact, many such attacks end with the mamono becoming a devoted wife to the man. However, despite a majority of mamono in the Zipangu Region being much more gentle than their counterparts in the rest of the world, there are still a few (especially the Ushi-Oni) that are known to violently assault men in pursuit of intercourse.

The Zipangu region is home to many monsters who make their lairs in mountainous regions. Those traveling over high peaks should be on the lookout for oni caves and tengu eyries. Shinobi villages deep within the mountainous areas of the Zipangu Region are the places where mercenary ninja kunoichi monster girls live and train; once a kunoichi finds a man that strikes her fancy, she will bring him back with her [4]. To eschew the mountains and stay at home isn't much more of a guarantee of safety, however; jurougumo and kejourou geishas provocatively solicit human streets, and even inside the home, your lantern or umbrella might suddenly sprout tits and attack you.

Some regions in Zipangu do resist coexistence with monsters, hosting monster-slayers such as the Amanomiya clan. This gave rise to the only named character from Zipangu in the Monster Girl Encyclopedia: Amanomiya Koyoi.

In the east of this world, there is an island country that possesses a culture which greatly differs from that of other regions. This country, and all of the small islands in the vicinity are referred to as the Zipangu region in our language. In the language of Zipangu, it is called “Kingdom of the Sun,” “Kingdom of Fire,” etc. What little information we have comes from the monsters that came from Zipangu, but this time let's spend just a few pages explaining about this mysterious country, its monsters and people, and the greatly differing relationship between them.

Compared to the continent where we live, the nation of Zipangu is an extremely small island country. Over there, they wear different kind of clothes than what we wear. It's a flowing clothing called “kimono,” and surprisingly they don't even wear underwear underneath it. They just wrap the cloth well. The swordsmen of Zipangu don't use heavy thick swords designed for cutting down opponents with brute force like we do. Instead, they fight with a special kind of thin, but extremely sharp swords known as “katana.” It's not just the way that the people dress that's different. Their culinary culture and way of life is also entirely different. What is especially surprising is the fact that the people of Zipangu have no faith in the chief god. They believe that the divine is present in all things, and sometimes even monsters are worshiped as gods. These people are not brought up with the teachings of the order from early childhood and instilled with an animosity towards monsters. Rather, since ancient times in Zipangu, humans and monsters have continued to live side by side as neighbors.

In Zipangu, there live many monsters that have evolved in peculiar ways found only in Zipangu. In Zipangu, monsters are called “yokai.” Since they possess vast power, there are those that are feared as monsters, and those who are worshiped as gods. Additionally, monsters live together with people in human settlements as though it were a natural thing. Like all monsters, the monsters of Zipangu also only take on the forms of beautiful, lascivious women who lead men astray and arouse their desire. In this way, they copulate with human men and obtain spirit energy to sate their hunger. After insemination, they give birth to children that are exclusively female monsters. But perhaps since they've continued to live as neighbors of humans since ancient times, not all of them attack and rape men. There are many races who have evolved to befriend humans, and get human men to like them.

A Utopia where humans and monsters intermixEdit

If an enemy were to appear in Zipangu, the people and monsters would band together and cooperate as inhabitants of Zipangu in opposition to the foreign enemy. In the past, one of the kingdoms of our continent launched an invasion in an attempt to conquer Zipangu. At the time, people and monsters formed a united front in order to repel the invasion, and they could often be seen fighting side by side in the units of Zipangu's military. Furthermore, the power of the monster warrior women known as “kunoichi” who are bound to the human state of Zipangu was instrumental in bringing about the end of the war. Using the advanced stealth skills they pride themselves on, they were able to sneak into the enemy commander's bedroom and employ the sex skills they train habitually. The enemy commander and all high ranking officers were made into prisoners of the monsters' bodies. Because of that, the war was brought to an end, and that country which was an anti-monster state has become a monster friendly state, and is now building a friendly relationship with Zipangu. In this way, Zipangu is one of the ideal nations created from the intermingling of humans and monsters where they walk together. Monsters can often be seen approaching humans in the same way, even on our continent, but in Zipangu humans can be seen approaching monsters.

It exists within the human realm. It is a land with an extremely different, peculiar culture. It's a place almost exactly like the ancient Japan of our world. Humans with peculiar dress and culture live there. The monsters that live there also have peculiar appearances, and dispositions. Unlike the west, from time immemorial, humans and monsters have nestled closely together. It is a land where humans and monsters have made a compromise to live together. Monsters such as “Kappa” ect. are mostly treated as neighbors by people. In general, monsters are seldom regarded as evil. Also, it is said that there exist some extremely powerful monsters who are even revered as gods. In this way, a peculiar faith that is different from “the order” has taken root. As previously mentioned, many of the targets of worship are also monsters. Also, on the other hand, monsters also devote themselves to humans. There are many races that have progressed to being loved, and the monsters are not part of the “Demon Lord's army.” They've built up their own forces. Also, in Zipangu, monsters are called “yokai.” 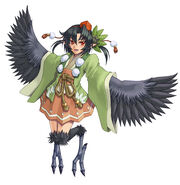 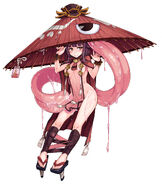 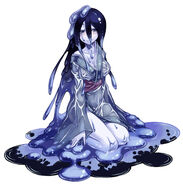 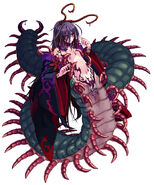 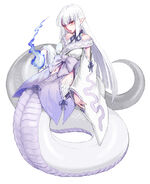 Yuki-Onna
Add a photo to this gallery