An undead-type monster, that is a human corpse reanimated by Demonic energy. Although they retain their memories from when they were human, their intelligence and reason are diminished. Guided by instinct, they wander graveyards at night in search of human men. The decay of their bodies is suppressed by demonic energy and even in the case of a messed up corpse with horrible wounds, becoming a zombie will restore the body to a certain degree.

However, in order to maintain their bodies, they absolutely must have a man's spirit energy. For that reason, their lust and appetite are extremely swollen compared to when they were human. When they spot a human man, they will aggressively attack him to obtain spirit energy out of both desires. They pile on their prey, indulging in sex and spirit energy.

By obtaining a large amount of spirit energy, a zombie's visible wounds will heal, yet they don't become indistinguishable from human, they can also regain the wits they used to have when living, but ultimately, due to their swollen lust and desire for sex, a zombie's thought patterns remain simple and their wits won't often be used for intellectual pursuits.

Furthermore, although they appear to be reanimated corpses, if their womb was originally intact, or an individual has received a large amount of spirit energy resulting in the restoration of her womb, then it's even possible for them to have children. In that case, the children born will also be zombies. According to one theory, it is said that zombies aren't human corpses reanimated by Demonic energy. Instead, they're human corpses that have changed into a living race called zombies.

Also, those who lack demonic energy and have low intelligence, sometimes attack human women by mistake. However, no matter how hard a zombie tries and no matter how long she goes at it, she won't be able to obtain much spirit energy from a human woman. Since their wits are lacking, they expect providing more pleasure to result in the release of spirit energy and they end up continuing to have sex for a very long time. Eventually, pleasure will flow into the woman's body along with zombie energy, which will violate her body and change her into a zombie while she is still alive.

After becoming zombies, their minds are shrouded in lust. While moaning alluringly, they head in a straight line towards human men.
Add a photo to this gallery

A MGE card made by Safnar 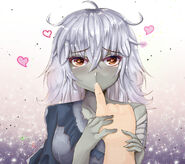 Zombie re-color, made By ThemoonprinceN 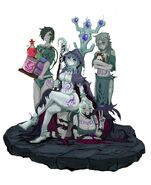 Retrieved from "https://monstergirlencyclopedia.fandom.com/wiki/Zombie?oldid=1166185"
Community content is available under CC-BY-SA unless otherwise noted.